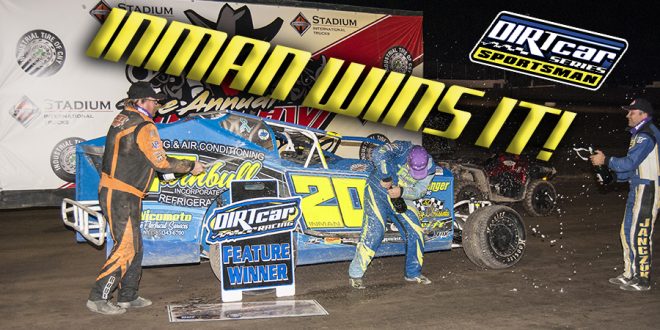 Inman Breaks Through at Fulton! 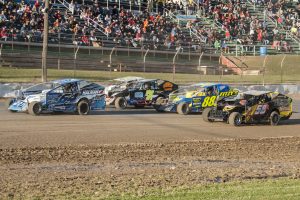 FULTON, NY – October 5, 2019 – The best DIRTcar Sportsman Modified drivers congregated in Fulton, NY for two days of non-stop racing action. 88 drivers signed in an attempt to make the 30-car 50-lap second round of the 2019 Fall Championships.

Kyle Inman from Darien, NY started fourth and never took his eyes off the top spot. He drove into the top three and battled Matt Janczuk for much of the race for the lead. Finally, Inman made a dynamite late-race move to steal the checkered flag.

“I knew it was going to be tough early. We had a great starting spot. The pace was way faster than we were hoping it was gonna be,” said Inman.

“We liked the way it was in the Heat Races, slick and slippery,” he noted on the track changes.

The changing conditions went the way of the No. 20k car by the end of the race.

“We were hoping there would be enough laps where everyone moved to the top and slowed down. The first 30 laps we were just hanging on, wide open. It was nice moving down and catching them.”

The racing was punctuated by a number of caution flags leading to several chess matches on the restarts.

Inman described the pass for the lead.

“We were trying to run the bottom, run the middle, the middle to the bottom. Everyone was wound up on the top and ya ain’t gonna pass anybody. I got to his rear bumper and stayed with him and then got side-by-side. I drove it in hard and it just stuck.”

The enthusiastic race winner had no shortage of positivity to relay.

“This car has been awesome all year. This thing is on rails everywhere race we go to. It’s an awesome race. I’m glad to be back here. This track is just awesome. Two times here this year and two wins. I’ll take that,” he said with a wide winner’s circle smile.

Matt Janczuk has been strong all year. He took the Track Championship at Utica-Rome Speedway and finished second in the first DIRTcar Sportsman Modified Series Fall Championship round at Land of Legends Raceway one week ago.

Janczuk remained upbeat in Victory Lane but he knows the win just slipped away.

“We had a real good Bicknell car. It was a little frustrating to run up front that long and I didn’t hit my lines right in one and two and caught the rut a couple times and ripped the front end out. I got settled back in and we did it again on that last restart. We’ll take second but we really wanted to win this one.”

Janczuk and his crew have a mantra going in NAPA Super DIRT Week.

“Top Threes win Championships. This is our first year running the whole DIRTcar tour and we’re looking forward to finishing the season out solid.”

Western Region Champion Brad Rouse started twenty-ninth and battled all the way up to third.

“We had trouble in Time Trials. We didn’t even get a lap down and broke a rear end. The Powers helped us and put a spare rear end in it and everything. Thanks to get we got out in time for the Last Chance Showdown. We ended up using our provisional to get in the field.”

Needless to stay, Rouse was the hard charger of the night.

“Starting way back there and coming through like that, it’s very tough for sure. To come up through here and finish third to these guys is amazing.”

The special Outlaw Weekend format included three additional Last Chance Showdowns after the first five. The final three were “win and you’re in” making them high-intensity crowd-pleasers to be sure. Australian driver Chris Corbett took one of them to make the big show.

Next up the DIRTcar Sportsman Modified Series heads to Utica-Rome Speedway on Tuesday, October 7. Then on Wednesday, October 8 the Series rolls on to the historic Weedsport Speedway. Finally, the three-day streak ends at Brewerton Speedway on Thursday.