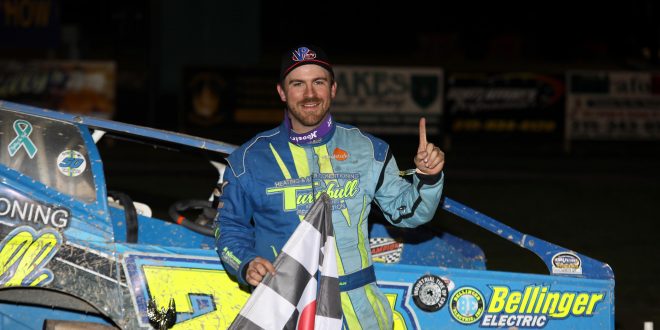 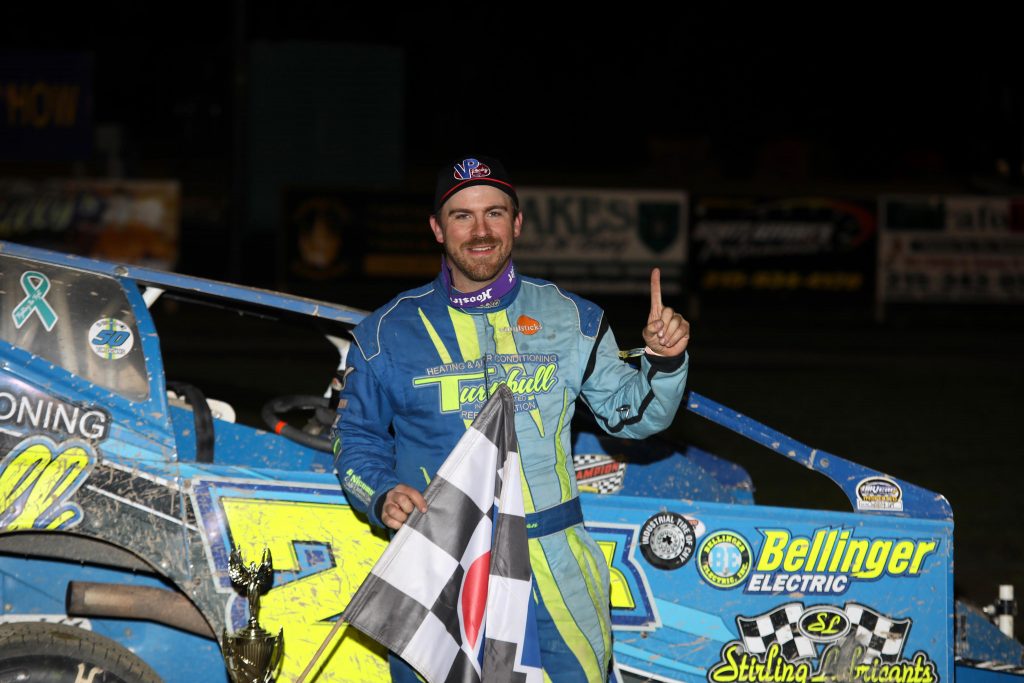 CENTRAL SQUARE, NY — Oct. 10, 2019 — Kyle Inman, for the second time in less than a month, parked the 20K in Brewerton Speedway victory lane as the DIRTcar Sportsman Series brought down the curtain on the 2019 at the “D Shaped Dirt Track Demon.”

Starting fourth Inman marked his time in the early stages as Chris Mackey led lap one and Alan Fink the second circuit.

It was then a four-car tussle between the trio and Mark Yorkers was a nail biter. On lap five Inman went to the high side and one lap later, at the line, he had the lead.

“You got to race against the best and that is where you want to be,” Inman said. “There are some amazing tracks out here. I’ve never really been this good here until this year and we’re two-for-two and I’ll take that. The weekly racers at Brewerton are amazing and we only come here a couple of times against guys who do it every week. So it is a really big deal for us.”

In the early part of the race he made some staunch moves.

“I just went all out and watched the last 10 laps of the 358 races and wanted to run the top and I wanted to find a smooth line into one and two and left a lane for me,” Inman said. “Then I went around the top and cleared those guys. I was worried with the restart with eight laps to go, but I made the best decision I could and worked out really well for us.”

Runner up, and series point leader, Kevin Root went from seventh to second in the final seven laps and moved to third on the 28th and second on the final lap.

Root said, “I just got up on the wheel in the last laps and had to drive it. It was tough early as it is difficult to pass when the track has this much bite in it and it’s tough to make up ground, but we got some good restarts.”

There were several late changes as Adam Pierson was fifth with three laps left and finished third ahead of Alan Fink and Mark Yorker.

Pierson chalked up his second top five in a row and said, “This is pretty cool as we have never done this well this week so we will definitely take it. I said if we started up front I would be happy with fifth, but I’m definitely happy with third, too.

“I really didn’t want to be on the outside and I know the small blocks were up there, but I just wasn’t comfortable. I went back to 10th or 11th (after starting sixth) and then I finally got to the bottom and picked them off and got  lucky enough to stay on the bottom most of the time. The car was good and could pull away in one and two, but the window was getting small in three and four. We’ll take a third place and be happy.”

The first 22 laps were smooth as the green flag stayed out. At the halfway point with 15 down it was Inman, Fink, Mackey, Yorker, Rouse, Pierson, Taylor, Root, Zach Sobotka and Gill filling the top 10 spots.

However, on the 22nd lap the red stopped the field as Justin Hutton flipped between the first and second turns with the car coming to rest on its side. He was uninjured, but the car was done for the night.

The ensuing restarts were difficult as Mackey found himself going around and several cars, though making contact with one another, escaped with only Andrew Smith, Jessica Power and Will Shields left at the scene.

Finally, the race wore down, but Fink and Yorker found themselves dropping from the podium to finish fourth and fifth respectively.

Standing alongside his trailer, Fink shook his head and said, “I really think my tires sealed over during the red. When we were running I was inching up to the 20K, but getting to him and passing him is another story.”

Yorker had even further difficulties as he explained, “Alan and I made contact when he came down on my right front. I got a right front flat tire with two to go. The red flag didn’t help me either as tires sealed over. However, we planned on racing race to race this week and now that we are in the top twelve in series points I guess we are running Oswego. I have to be there anyway to help Timmer (Tim Sears Jr.) so I might as well race.”

So now the focus turns to Oswego, but the race for the title will finally be decided in the next two shows at Oswego and at Brockville the following weekend.

However, the competition is intense in the Sportsman division as evidenced by the three different winners in three consecutive nights of racing action.