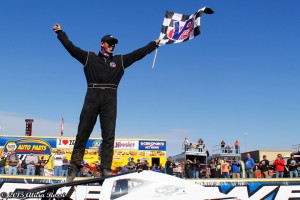 SYRACUSE, N.Y. – October 11, 2015 – In his second ever and last appearance on the “Moody Mile” at the New York State Fairgrounds, James Michael Friesen of St. Catharines, ON wired the field in a dominant performance after starting third in a 36-car field.

The 30-lap race had eight cautions, but no one, including runner-up Rocky Warner of Gloversville, N.Y., was able to draw alongside Friesen’s Manchester Cable No. 52.

Warner rose up from 10th to finish second. Shane Pecore of St. Andrews, ON completed the podium finish ahead of Ronnie Davis in 4th and Corey Wheeler in 5th.

“The track was very slick in one and two, but there was rubber in three and four that worked for me,” Friesen said. “He (Warner) would catch me in turns one and two when I had to lift, but I could gain on the other end.”

Friesen said his team shut down his weekly racing schedule two weeks ago to prepare for Syracuse.

“I got a lot of help from James and Ivan Little,” he said. “This win feels awesome.”

Warner ran the Jake Spraker-owned No. 1J in the low lane and passed Pecore for second on lap 18. “Friesen fired off a little better on the restarts,” he said. “On the longer runs, we were better.

Seventy-five Sportsman Modifieds attempted to qualify for the event.

The finale of the 2015 DIRTcar NE Sportsman Series takes place as a part of the Fall Nationals event at Brockville Ontario Speedway Saturday, October 17.