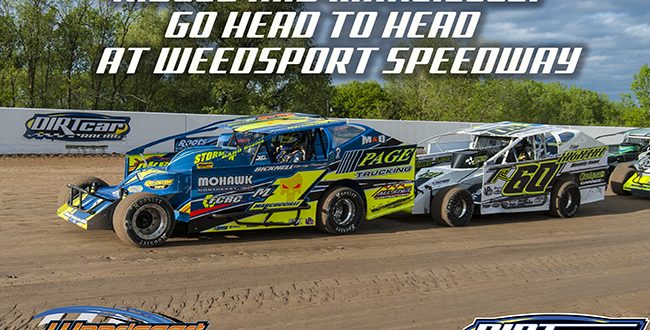 WEEDSPORT, NY (May 25, 2018) – Weedsport Speedway’s Heroes Remembered 100 special on Monday, May 28 will see the action packed Spano Container Sportsman Shootout Series join the Super DIRTcar Series Big Block Modifieds for a thrilling two division program.
As was the case in 2017, Kevin Ridley is once again the man leading the way in his No. 20X machine, after winning the season opener for the second consecutive season.

Hot on his heels is last year’s championship runner-up, Dave Marcuccilli.
While these two drivers started where they left off, there is a host of other top Sportsman shoes that hope to knock them off on Monday night. Matt Guererri, Kevin Root and Eric Giguere were factors in the May 20 season opener and currently ride in the top five of the Sportsman Shootout standings. Each will look for redemption on Monday, with their sights set on Victory Hill.
Finishing the top ten in the current series standings are Will Shields, Tony Finch III, Andrew Smith, Alex Yankowski and Nick Guererri.

Veteran Nick Guererri started in the second row of last week’s opener but found the inside jersey barrier causing a flat left front tire early on. Guererri was able to bounce back for a tenth-place finish and would have likely been a threat for the win, as he will be on Monday.

The opening night field was a who’s-who of the sport with drivers such as Connor Cleveland, Zach Sobotka, Brandon Ford, Rocco Leone, Jim Spano, Michael Stanton, Nick Krause, Tom Collins, Corey Barker, Amy Holland, Tyler Thompson, Alan Fink and more all competing for the $1,000 prize.
Those drivers and more will be back in action on Monday for round two of the lucrative championship series.

The Spano Container Sportsman Shootout Series covers seven races at The Port with a minimum of $1,000 going to the winner of each series tilt. An overall series champion will once again be presented with a hefty $2,000 prize following the final series event during the Super DIRT Week Kickoff Party at Weedsport on Wednesday, October 3. The top ten drivers in the standings will receive a point payout.

All seven events on the Spano Container Sportsman Shootout Series schedule will be DIRTcar sanctioned providing bonus opportunities for DIRTcar home track points. As a result, a DIRTcar license will be required at all events in order to compete.

Interested in seeing your company listed in our press releases? Be sure to call Tana at the Weedsport Speedway office at (315) 834-3067 for sponsorship and advertising information.
For more information on Weedsport Speedway, visit online at www.weedsportspeedway.com, follow on Twitter @WeedsportSpdwy and LIKE on Facebook.

About Weedsport Speedway: Purchased in 2013 by Al Heinke, Weedsport Speedway has returned to a real racers track, providing a complete venue for racers, their families and friends, and for the fans looking for motorsports entertainment. Officially opened for the first time on July 24, 1955 – the Weedsport Speedway 3/8 mile dirt oval has produced a legendary list of drivers and champions including Will Cagle, Danny Johnson, Bob McCreadie, Alan Johnson, Jack Johnson, and Dave Lape to name a few. Today the facility welcomes the best of the best in dirt short track racing from the Craftsman World of Outlaws Sprint Car Series and the USAC National Sprint Cars, to the Super DIRTcar Series Big Block Modifieds along with the DIRTcar 358-Modifieds, Sportsman, Pro Stocks, and more. While racing entertainment is the focal point, Weedsport Speedway has gone the extra mile in welcoming Weedsport Productions, which brings the facility full circle with a dedicated digital entertainment team for web, television, and on site screen usage.