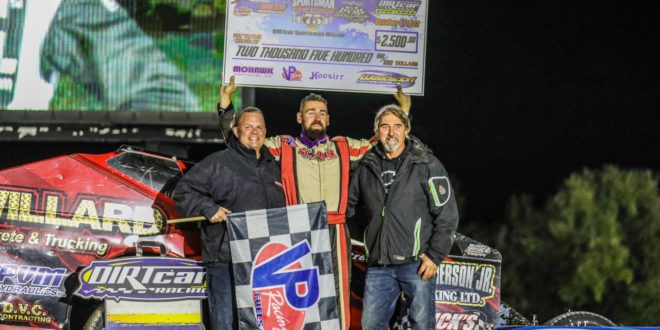 With multiple track championships, the Hoosier Racing Tire Weekly Racing Series championship and the most wins of any driver in the division, Cody McPherson has been on a mission this year. His appearance in Weedsport Speedway Victory Lane Tuesday night was just the next target hit on his DIRTcar Sportsman Modified Series expedition.

McPherson, the 30-year-old from St. Catharines, ON, came into the 50th NAPA Super DIRT Week as one of the top-ranked drivers in the division and showed exactly why he owns that distinction Tuesday night, leading the final 43 laps around the 3/8-mile oval and bagging a $2,500 check for his efforts.

“It was not easy,” McPherson said in Victory Lane. “I knew it was going to be iffy for the first 15-20 laps. But I just kept working it and working it, and it finally came in, and we were good.”

McPherson said the team put a new right-rear tire on the car for the event – something he and the crew don’t normally perform well with – but went with it anyways, and reaped the ultimate reward in the end.

Starting from the pole, McPherson’s car did take some laps to spark, but came to life almost instantly as they clicked-off the 30th lap. He quickly closed the gaps he was holding to Matt Janczuk and Gavin Eisele and made his moves, taking the lead for good on Lap 33.

Over the next 40 circuits, McPherson was forced to battle through multiple waves of lapped traffic, navigating in-and-out and times just to keep his pace.

“Lapped traffic was a little wild,” McPherson said. “I knew there wasn’t much on the top, so I had to just wait for him to miss the bottom in Turn 1 and stick my nose in there and just hope they see me.”

In the end, McPherson was able to hold on and outrun his challengers to claim the Sportsman Series win in the kickoff racing event to the 50th Super DIRT Week. However, at one point, it looked like he may not have.

Eisele, who led 28 total laps of the Feature, slipped back to P4 after losing the lead to McPherson. He was able to mount a late-race charge and drive it all the way back to second before the checkers, moving past rivals Chris Mackey and Janczuk on the way and nearly getting close enough to make a move on McPherson.

“We were good early on, just tried to get through those lapped cars,” Eisele said. “We had a good charge at the end, and I guess that’s all that matters.”

Completing the podium was Janzcuk, who went up-and-down the top-five quite a bit through 75 laps but never was able to taste the lead. In the end, he held-off the last-ditch efforts from Chris Mackey to bag the third-place finish.

“We’ll take third; it was hard-fought,” Janczuk said. “I got into Chris [Mackey] getting into Turn 1 there. It’s tough – we come from the same town, so when you make contact with people… it was ever-so-slight, but you still don’t like to touch people.”

The DIRTcar Sportsman Modifieds continue their 50th Super DIRT Week activities Wednesday with a practice session at Oswego Speedway, followed by the next Series race at Brewerton Speedway as part of the track’s annual Hurricane Harvey event.

Tickets will be available at the Brewerton front gates. If you can’t be at the track, stream all the action live on DIRTVision.