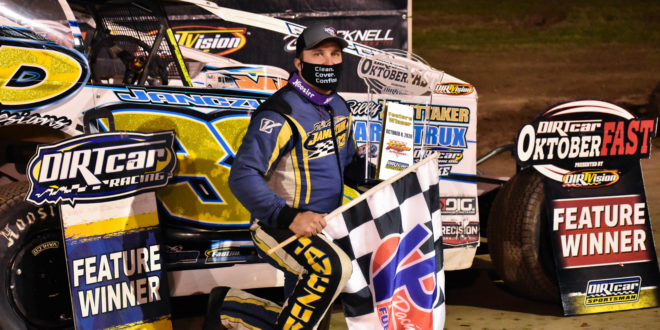 Leading from flag-to-flag and completing a clean sweep of the night in the DIRTcar Sportsman Modified division pres. by Racing Electronics, Janczuk towered over a stunning 105-car field to win the second feature of this week’s OktoberFAST tour.

It was a case of sweet redemption for the driver of the No. 33X, who led nearly the whole race of last year’s Sportsman Shootout 50 at Fulton before faltering in the closing laps to finish second to Mike Maresca. On Thursday, nearly a year to the day of his heartbreaking 2019 loss, Janczuk refused to let history repeat itself and flipped the script with a perfect night at the Route 57 clay oval.

He was fastest in group qualifying at 18.930 seconds, won his heat race by a remarkable 3.751-seconds, redrew the Penske Shocks Pole Award ($250), and then commanded all 30 laps of the feature to win the second OktoberFAST program of the week for the DIRTcar Sportsman Modifieds pres. by Racing Electronics.

His ninth overall win in a chaotic 2020 season, Thursday’s triumph also bumped Janczuk to ten career Sportsman Modified wins at the Fulton, N.Y. 3/8th-mile. He is just the 13th driver in track history to reach double digit wins in the division, entering into a tie with Larry Bezner and Alan Fink for 11th on the all-time wins list.

Going beyond the century mark in car count, a jaw-dropping 105-car field was whittled down to 32 feature starters through a process including eight flights of hot laps / group qualifying, eight heat races, four last chance showdowns, and the 30-lap finale.

Negated by three cautions in Thursday’s main event, each found race leader Janczuk in different situations. The first one, destroying his massive 3.648-second lead on lap six. The second one, forcing him to line up with a hard-charging Andrew Buff to his outside. Both times Janczuk was able to answer the call and easily fend off all challenges.

The third one, however, was his potential saving grace. With lap traffic holding him up, Janczuk’s lead dwindled down to 1.600 seconds as Buff of Latham, N.Y. was on the prowl and cutting into the difference with only nine laps left. The caution flew on lap 22 though and pulled Janczuk out of traffic and put him into clean air with Buff forced to restart on his tail.

Driving away to a 1.978-second advantage at the checkered flag, Janczuk happily accepted his victory lane trip and $1,000 check, while Buff was left to wonder what could’ve been in lap traffic.

“This car has been awesome, and what a testament to this team,” Janczuk said afterwards. “I love Fulton Speedway so much. I wish the fans were here, but I’m sure they’re watching at home on DIRTVision. After losing last year late in the race, this feels great to get back. Andrew Buff is nobody to slouch on, so it got interesting there at the end.”

“You can’t complain anytime you finish behind Matt,” commented Buff. “I wish that caution would’ve never came out; I really wanted to run through lap traffic. They were holding him up a little bit and I was gaining ground on him.

For Buff, in his second-ever trip to Fulton Speedway, he registered his second, second-place finish of OktoberFAST. Rounding out the top five on Thursday was AJ Miller of Fultonville, N.Y. with the final podium place in third, Jeffrey Prentice of Central Square, N.Y. in fourth, and Brian Calabrese with a 21st-to-fifth bid to earn Penske Shocks Hard Charger Award.

The touring series, which is participant-only due to COVID-19 restrictions, concludes with two more nights on Saturday, October 10 at Land of Legends Raceway and Sunday, October 11 at Weedsport Speedway. Fans catch watch Every Lap LIVE from the comfort of home via the DIRTVision FAST PASS.