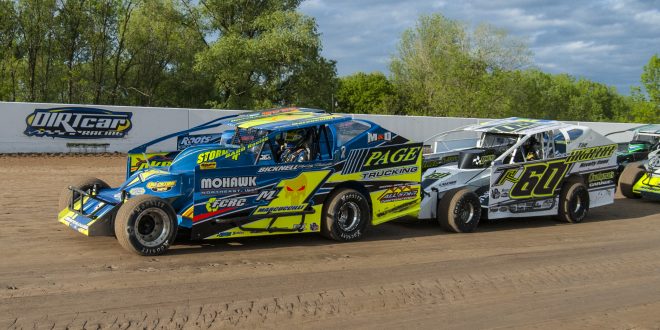 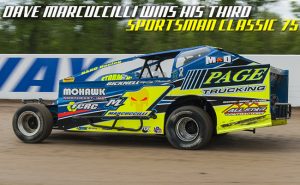 Marcuccilli started the 75-lap Central Region DIRTcar Sportsman Series special from 8th position by virtue of the re-draw after winning his qualifying heat race, and stole the top spot from dominant early leader Connor Cleveland in lapped traffic on lap 66 after touching the outside wall in turn four on two separate occasions trying to find racing room.

Marcuccilli was never challenged over the course of the final 9-laps, picking up his 10th DIRTcar Sportsman win of the season and second of the year at Weedsport, worth a hefty $2,500.

“I couldn’t get off of turn four for nothing early on, but we just drove it a little different and it came around,” said Marcuccilli, on top of Weedsport Speedway’s Victory Hill. “Traffic definitely helped me out, but I just can’t believe I didn’t knock the right rear off of it hitting the wall in turn four. To be able to win this race three times is great, I don’t even know what to say.”

Starting from the pole position, Cleveland led the first 65-laps of the Classic in impressive fashion but would fall short at the finish.

“It’s tough when you’re in the lead in lapped traffic because you aren’t really sure of the best line to be in,” said Cleveland. “We just spent too much time with that lapped car and Dave got us. If we would have had a caution before we got to traffic, I think we would have been ok.”

Matt Guererri has been fast all year long and Weedsport and was able to put together a podium finish against a stout field of racers.

“We were pretty good, just not as good as Connor and Dave,” said Guererri. “We were just too free from the center, off. This is like the Daytona 500 for us around here, there are a lot of great drivers at this race.”

After starting from outside of row four, Marcuccilli drove to the third position in the main event by lap 10 giving chase to early race leaders Cleveland and Guererri.

Cleveland, Guererri and Marcuccilli were the class of the field through the entire event, with Marcuccilli eventually getting the best of Guererri for the second position on lap 38.

From that point on it was all Cleveland and Marcuccilli out front as the duo sliced through lapped traffic through the remainder of the 75-lap distance.

The caution would do little for the rest of the field as Cleveland and Marcuccilli continued their two car battle out front.

For 65-laps Cleveland made all the right moves in his No. 09 machine. However, on lap 66 Marcuccilli was able to use a pack of lappers to his advantage, diving through the middle of Cleveland and a lapped machine to take the point on the back stretch with only 9-laps to go.

From there, Marcuccilli would pull away to celebrate his wedding anniversary on top of Victory Hill.

A total of 63 DIRTcar Sportsman were in the pit area on Tuesday evening with Kane Bristol winning the D-Main, Bob Henry Jr. claiming victory in the C-Main and Tyler Thompson taking the checkered flag in the B-Main.