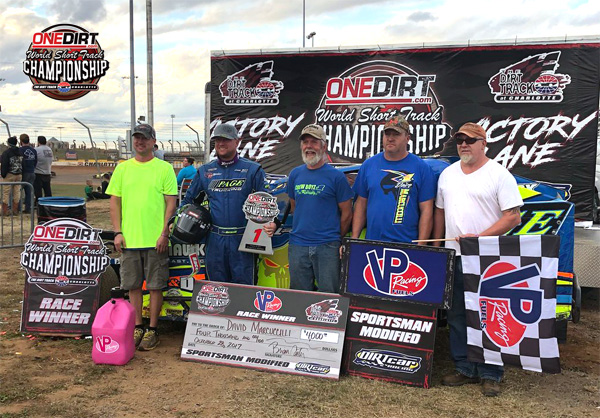 Marcuccilli, who was also victorious twice during NAPA Auto Parts Super DIRT Week, started fifth in the 30-lap Feature as Eric Giguere paced the field to Green and led lap one. Defending race winner Ronnie Davis utilized the top side of the 4/10th-mile dirt oval to grab the lead from Giguere on the third circuit. Marcuccilli made his way by Giguere for second on lap eight and begun chasing down Davis for the lead.

Davis continued to run the top, while Marcuccilli found grip on the bottom, setting up a thrilling side-by-side battle for the race lead for multiple laps. As lapped traffic became a factor, Marcuccilli and Davis went three-wide for the lead on several occasions.

Marcuccilli completed a textbook slide job for the lead in turn two with three to go and went on to score his 20th triumph of the season.

“It’s been an amazing year. We had a little lull where we struggled for a bit, but these last two months have been incredible,” said Marcuccilli. “The season is over for us. It was great to come down here and be competitive,” added the New York native, who scored the win in the Sportsman Feature at Oswego Speedway during NAPA Auto Parts Super DIRT Week.

Rocky Warner started alongside Marcuccilli and worked his way forward to second. Warner was strong late in the race, coming from fourth to second in the final five laps. Davis settled for third and completed the podium. Giguere and Brad Rouse completed the top five.

Another big winner of the evening was Nichols, New York native Kinser Hill. Hill won the raffle of all the drivers entered into the OneDirt World Short Track Championships and scored a brand new 602 Chevrolet Performance Crate Motor. Hill suffered bad luck in the Last Chance Showdown, ultimately resulting in him not being able to qualify for the Feature.