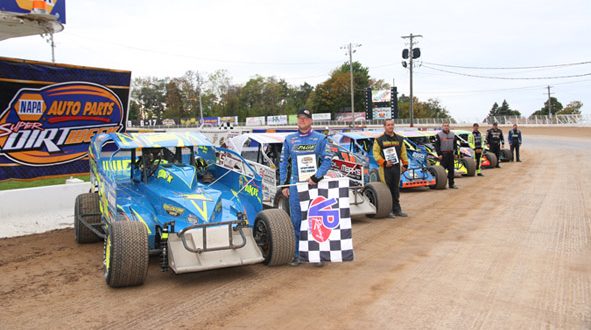 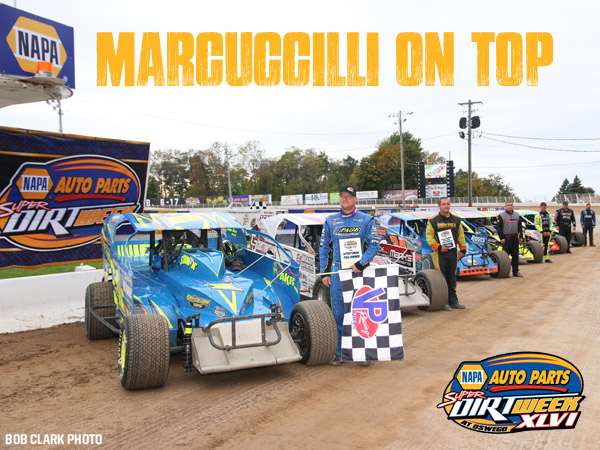 Oswego, NY – Oct. 6, 2017 – For the second year in a row, Dave Marcuccilli paced the Sportsman Modified Time Trials at the Oswego Speedway and will start on the pole of the NAPA Super DIRT Week DIRTcar Sportsman Modified Chevrolet Performance 75 Championship.

Marcuccilli was one of six New York natives to lock in to Sunday’s Championship event.

Marcuccilli’s official time around the 5/8th dirt oval was a 22.426, worth $500 thanks to Unique eCigs. Last year Marcuccilli set quick time with a lap of 23.451, showing the significant progress the NAPA Super DIRT Week track crew has made in their second year at Oswego Speedway.

Marcuccilli, who picked up the victory late last night at the satellite event at the Brewerton Speedway, was up until 3 a.m. this morning preparing for this afternoon’s time trials. “All the hard work is worth it for times like these,” Marcuccilli said. “We get to relax now and hopefully be up here Sunday.”

Tonawanda’s Matt Farnham was second quick and praised the Oswego track surface. “The track has been great all week long. It should provide some really good racing,” Farnham said. Farnham picked up the Outside Pole Award, worth $250 thanks to Northeast Racing Products Auction & Trade Show.

Third quick, Kevin Root, echoed the admiration of the Oswego Speedway Track Crew. “Hats off to the track crew. They have given us a heck of a racetrack to race on. It’s DIRT Week. This is what we live for,” the Geneva native said.

The track slowed down as Time Trials wore on with five of the six top qualifiers coming from the first three groups. That didn’t hold back Forward, who went out in Group 11.

“I knew I had a good car if I could keep it rolling,” Forward, who picked up the win at Tuesday’s satellite event at Utica-Rome, said.

The aforementioned drivers are locked in and will start up front in the four qualifiers that will be held Friday night at the Oswego Speedway. The qualifiers will feature 18 cars in each, transferring the top four non-qualified cars from each heat to Sunday’s Championship event.