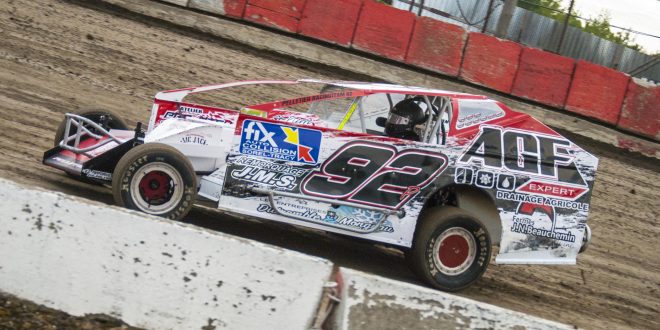 Granby, QUE, CAN – August 10, 2018 – Martin Pelletier showed everyone why he is the driver to beat in the Sportsman ranks at Autodrome Granby, Pelletier led all 50 laps of the Lussier Chevrolet 50 to capture his first feature on the DIRTcar Sportsman Series.

Pelletier was an happy customer in the winner circle: ‘’The car was great but was skeptical with track conditions but we worked hard, I knew Shane was close to me and he is good on a slick track, the track rubbered up at the bottom at the end, I thought I would see him’’ said Pelletier who collected his tenth win of the season at his local track. ‘’I have a good team behind me, the guys worked hard, we made some good lane choices and got some good decisions throughout the year’’

Finishing runner up was Cornwall Speedway regular Shane Pecore: ‘’Pelletier is good everywhere he goes, we started 10th able to move up to second, it is very good for our team, especially after our bad night at Cornwall last Sunday’’ said Pecore. ‘’The track was racy, it rubbered up at the end but a good run for all the top 5 runners, we will take it’’

Having his best finish on the DIRTcar tour was Jarret Herbison: “The car was really good tonight, it could run anywhere, being able to run with guys such as Pelletier and Pecore, it is pretty cool!’’ mentioned Herbison.

Martin Pelletier grabbed the early in the 50-lap event in front of Even Racine and Jarrett Herbison. Pelletier quickly showed his dominance but lost his great lead as caution was out on lap 5.

Pelletier remained in the lead with Herbison moving in front of Racine on the restart as Patrick Picotin and Shane Pecore cracked the top 5.

While Pelletier had a full stretch lead, Herbison and Racine were racing side by side for second, Racine used the outside lane to pull away on lap 13 with Pecore now running fourth. An accident slowed the field of lap 18.

Pelletier to the lead on the following green flag with Pecore moving to second with Racine in third. The drivers of the 92P used the outside of the speedway for a good portion of the race as Pecore was trying to gain some ground on the leader as Jarrett Herbison completed the top 3 at the halfway.

The race picked up some good momentum and leaders caught heavy traffic, Pelletier was able to remain first and kept a solid distance to Pecore with Herbison having his best run on the tour.

Pelletier imitated Carey Terrance and had a dominant run leading all 50 laps in the race winning his first series race of the year and his 16th checkered flag of the season.

The Northern portion of the DIRTcar Sportsman Series continues at Cornwall Motor Speedway on Sunday September 2nd with the Draper Doors 50.