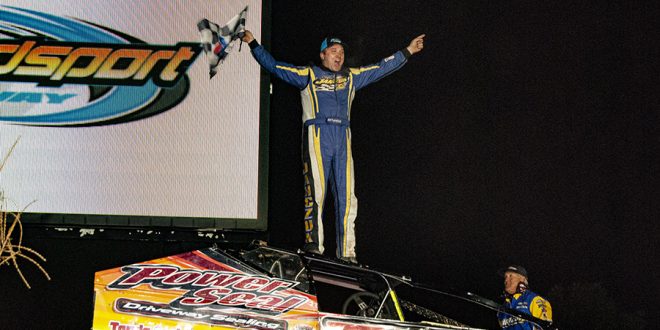 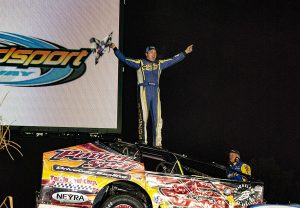 Just 24 hours earlier Janczuk had seen his championship car destroyed at Utica-Rome in a multi-car pileup that just about dashed his hopes for the DIRTcar Sportsman Series title.

However, driver-owner Tom Juno had previously offered Matt a ride in his Power Seal 25 for Weedsport and Brewerton so Matt knew he had a ride. However, to make matters even more interesting Tom said, prior to the Weedsport race, “We offered this car to Matt for Oswego seeing as his was destroyed.”

Standing atop “Victory Hill” an enthusiastic Janczuk said, “I’m quite emotional right now and I really don’t know what to say.  I really have to thank Tom for letting me drive this car.”

Janczuk started sixth on the field and by the third lap he had passed Alan Fink to get to third behind only front row starters Jackson Gill and Adam Pierson.

The lone yellow of the race came out as Matt Guererri had mechanical problems on lap six.

Three laps later Janczuk went inside of Pierson on the back stretch and had second locked up.

Finally, Matt took the lead on the 12th lap as the leaders raced down the front stretch and Janczuk went outside for the lead.

“I wanted to get to the top as the bottom was just too slow,” Janczuk said. “I was rolling outside in three just before the caution. I thought maybe I could snooker them and it worked out for us. I’m not sure how good we were, but I gave it all we had. I’ve been chasing the big checks all year and finally got one tonight.”

With non-stop green action Janczuk was in traffic throughout the later stages of the race. Gill was able to close in, but at the checkers was just over a second behind.

Gill, who had his second top five in two nights, wasn’t disappointed and said, “The car was much better than last night at Utica-Rome where we were too tight. We had roughed out a plan and the car seemed that much better tonight. I’m happy with the finish as we finished in front of the guys that we needed to in the point standings.”

Pierson was more than content with his third place despite the fact that he finished 3.2 seconds behind Janczuk.

“I feel really good about tonight,” Adam said. “It is the best we have finished here this year. We qualified good, made the redraw and started up front. We have done our homework and changed shocks, but we are in one piece. I came here with a goal to finish in the top five and we came home third.”

While the top three were pretty much separated from the field throughout the 30-lap event, the action behind them was highly competitive.

At the halfway point Janczuk was comfortably in front while Gill and Pierson were contesting the runner up spot. Back in fourth Chris Mackey was doing all he could to hold off the challenges of DIRTcar Sportsman point leader Kevin Root while completing the top 10 were Alan Fink, Brett Senek, Andrew Smith, Shane Pecore and Tyler Corcoran

As the race wore on the only change came when Root passed Mackey on the 22nd lap for fourth.

Root, who didn’t lose any ground in his chase for a repeat title, said, “It was all right, but I started back in 11th and got to fourth. You really can’t win from that far back.  I guess I could have run better, but we’ll take it and were able to go home in one piece. Also it didn’t hurt us in points.

Mackey was content with a top-five finish and explained, “This is only my second time ever here. We made changes, just threw stuff at it and it could have been tighter, but I think we learned some stuff that we can carry over to Oswego this week. I’ll take a top five here.”

So the championship quest continues for the DIRTcar Sportsmen drivers and that will continue at the Brewerton Speedway on Thursday night.