33 Sportsman Modified drivers gave it all they could at the OneDirt World Short Track Championship to see who would wind up out front when the checkered flag fell. 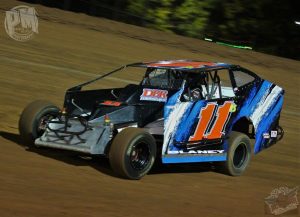 Name: Don Blaney
Class: Sportsman Modifieds
Hometown: Hartford, Ohio
Age: 55
Home track: Sharon Speedway
Starting his racing career as a crew member in NASCAR, Don Blaney has been playing in the dirt for the past 25 years. Blaney will be running in the NE Sportsman series in a car that he has owned for a whole two months.
“Dave Blaney is my cousin and he has been a huge help to me. We’re big on family so I had my car at his shop this morning just going over everything before we headed to the track,” said Blaney.
Blaney took a break from driving for a couple of years but is excited to return to the track.
“I’ve been helping others out this summer on their cars so I bought this modified about 2 months ago. I’m back and I’m excited,” said Blaney. “I’ve raced [at Charlotte] before so I know the characteristics of the track. I just needed a refresher course so it’s nice to have family here that can help me out.”
Blaney’s main goal for the weekend is to make the show and try to stay away from anything green.
“I never race on Friday the 13th and I try to stay away from the color green. Any green car out there…they’re bad luck,” said Blaney.

Ronnie Davis III currently holds the championship title at Fulton Speedway. Davis III took to the track for the OneDirt World Short Track Championship to see how he could hold up against drivers from across the nation and Canada.

“It’s definitely a fun track and one of my favorites now, it would be really really good to get a win here,” said Davis.