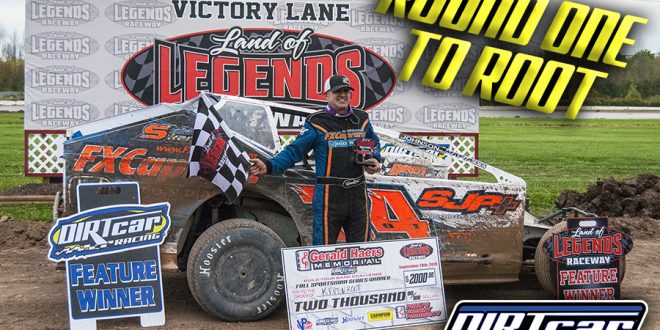 CANANDAIGUA, NY – September 29, 2019 – DIRTcar Sportsman Modified Series kicked off its Fall Championship at Land of Legends Raceway in Canandaigua, NY to begin a seven-race stretch of Series races. The mighty Sportsman Modifieds ran in support of the Gerald Haers Memorial and put on a memorable show with Kevin Root and Janczuk battling side-by-side for the lead throughout the second half of the race.

The No. 33x of Matt Janczuk and Land of Legends Raceway regular Kane Bristol lead the field to the green flag on the historic half-mile. Bristol jumped to an early lead but Janczuk battled back to retake the top spot on a restart. From all the way back in the ninth starting position, Kevin Root made big gains in the early going.

Root made his way into the top-three and then passed Bristol for second. The DIRTcar Sportsman Modified Series Central Region Champion and 2019 Land of Legends Raceway Track Champion then set his sites on Janczuk. Root tried everything, going high and low on the Utica-Rome regular and made the pass only to lose it again with six laps to go.

The pair continued to duel and with two laps to go with Root taking the position in the midst of heavy lapped traffic. He went on to win the 40-lap, $2,000-to-win Feature.

After a rooftop celebration with his son, Kevin Root took a moment to remember why we were all there, “Tonight is not about me. It’s about a guy [Gerald Haers] that touched me when I grew up and I’m grateful to the family. This one is for Gerry. He did a lot for me in my life and for my family.”

Root and Janczuk put on a fantastic show that Gerald Haers would have been proud of.

“If the fans did not enjoy that, I don’t know what you are doing right now. That was one amazing race!” Root exclaimed. “We had an amazing, amazing car.”

The No. 34 lost the lead on a late-race restart: “I didn’t think we were going green, I didn’t see the lights out, I think my one-way-radio was messed up and he [Janczuk] took off and I thought, “Oh shoot!”.

Root described dire moments in the closing stages: “I came down the front stretch behind him and just about hit the wall. I told myself to calm down and get my stuff together, you got the best car. Get your composure, hit your marks, slow down, don’t overdrive it, and lapped traffic played a key role.”

That’s great advice for any driver, rookies, and veterans alike.

“We came into the combined Series leading [from bonus points in regional action] and you gotta start out great. These guys are so good. The competitiveness is just unbelievable in this class. On any given day we have fifteen cars that car win a race here. For us to start like we are supposed to, to back up last year, means the world to me.”

Matt Janczuk impressed the crowd with his second-place finish on a track he rarely sees.

“This track was challenging. It was only my second start ever so I’ll take a second to Kevin [Root]. He’s a hell of a competitor. With him having all that experience here, I’m just happy to have run as well as we did going into the rest of these Fall Championship races,” Janczuk said.

The No. 33x was noticeably running different lines throughout the second half of the race while Root stayed glued to the bottom line.

“I was struggling in turns one and two. I was OK in three and four but I was just searching. Kevin was really good on the bottom and I tried following him but it wasn’t working for me. I had to find something and going high was the only thing I could do to stay with him. We gave him everything we had tonight and we’ll keep good notes for next year.”

It’s a strong finish going into the grueling stretch of Series races starting this coming weekend at Fulton Speedway.

Local fan-favorite Kane Bristol rounded ou the podium. The track conditions were a little different that what we had set the car up for but Bristol was pleased with the start of his Fall Championship run.

“It seems like it got a little slicker coming off of turn four and I was having trouble with that. I think I needed to make some moves earlier. This track is similar to layout and slickness as Oswego so we can see how our car does in that situation. We are fairly happy with the way it went the last couple of weeks and hopefully, we can carry the momentum and make a few tweaks.”

While not the finish he was looking for, Tony Stoughtenger received a certificate for a free Hoosier Racing Tire as his twenty-sixth finishing position was randomly chosen for the prize.

The DIRTcar Sportsman Modified Series Fall Championship gets back underway at Fulton Speedway for the two-day show as a part of the Outlaw 200 Weekend. Last year 90 plus cars were in attendance.