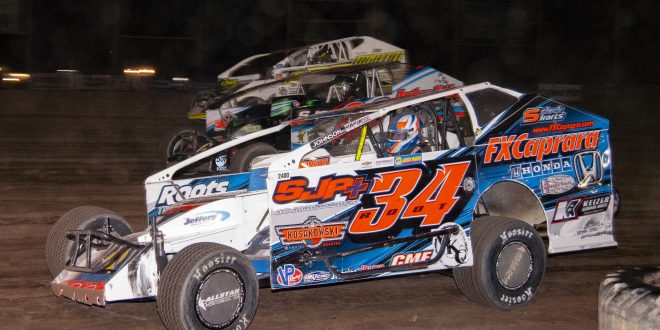 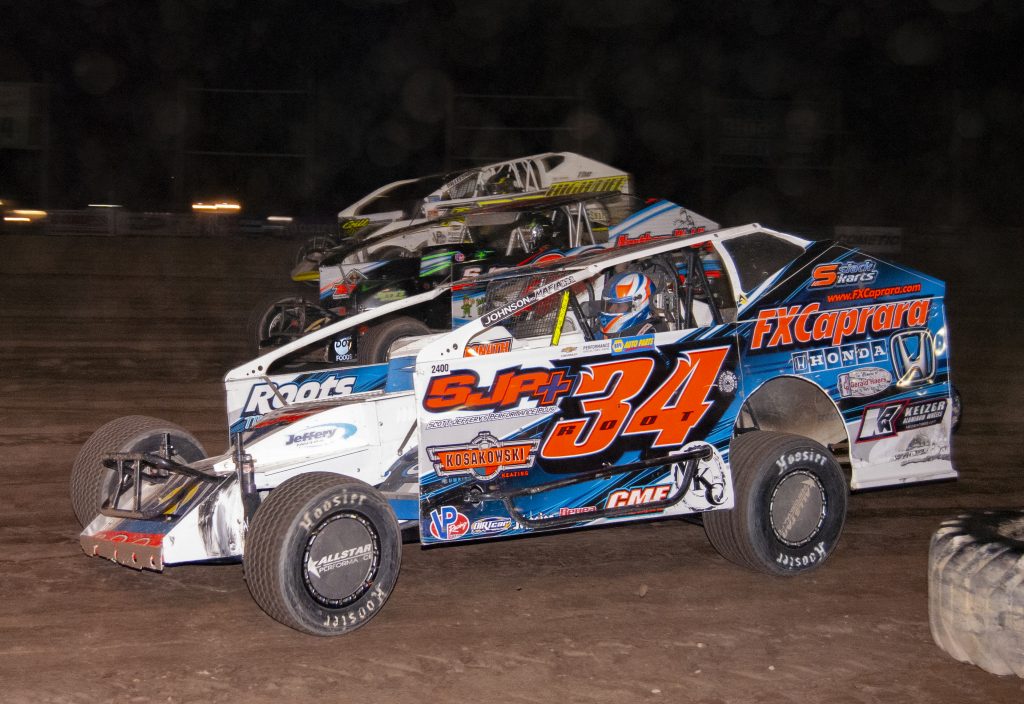 After a three-car battle with young lion Jackson Gill and veteran Alan Fink, Root finally took the lead for good on lap 12 as he went from third to first.

“Alan and Jackson got together and I steered so I could just diamond off the turn,” said Root, of Geneva, NY. “You had to get things done on the restarts and tonight the car was phenomenal. It was a hell of a racetrack and you could just go anywhere. It is the best Utica-Rome has been all year.”

Fink settled for second and early on in the race he found himself alongside and battling his nephew Tyler Corcoran and Gill.

“Tyler, Jack and me were three wide for a long time, and there was no room to give anything out there,” Fink said. “We didn’t hit. I could have been better on the restarts tonight, but it was a wide-open track out there and good restarts were needed if you were going to move forward. This is my old number eight which is ‘Old Faithful’ just with new body panels. There’s nothing wrong with finishing second to Kevin.”

Third-place Kyle Inman appeared to have to settle for fourth, but with a lap and a half to go third-place running Brianna Ladouceur ran out of fuel and Inman found himself with a podium finish.

“I was really tight and it was not turning,” Inman said. “This wasn’t the regular Utica-Rome surface. It had plenty of bite and the cooler temperatures kept that bite in it. I handle better on black and slick surfaces. I’ll take it. It is a good way to start Super DIRT Week and I had one car and it is in one piece.”

The fans were quite attentive in the opening laps as Corcoran and Gill took turns in leading the first four laps. A couple of laps later Fink joined the duo to make it a three-car battle.

Root, who started eighth, found himself in fourth at the quarter point on lap 10 as the restart on that lap after a Dave Moyer off track excursion saw Fink go to the point.

Moments later Root was leading the field and the rest was history.

Janczuk was running fourth, but brake problems forced him to the pits only to have him restart at the rear of the field with well more than half the race remaining.

However, Janczuk saw his title hopes dashed on lap 19 as his 33x along with A.J. Filbeck took a wild ride on the front stretch coming out of turn four.

“I really don’t know what happened, but the track was completely blocked by the time I got there,” Janczuk said. “I saw the ground a couple of times and the car is heavily damaged.”

At the halfway point Root, Fink and Gill were comfortably in front with Inman back in fourth followed by Tim Falter, Ladouceur, Brian Calabrase, Adam Pierson, Zach Sobotka and Chris Mackey.

Gill, who eventually finished fourth, began to falter slightly and later noted, “We were just over tight and it is the second straight race this has happened to us. We’ll take notes and move on. It was just getting too hard to drive.”

So Ladouceur continued to advance and on the 27th lap restart after a yellow for a damaged Ed Lukas 77l she took over third from Inman. She remained there until the fuel starved engine quit in the closing moments.

Charlie Tibbitts completed the top five after starting 22nd. “When you are starting that far back early on you just have to be careful not to get collected in an accident,” he said. “Then you have to wait for the field to spread out a little bit and start making your moves. I guess I am happy with a top five tonight.”

The point race for the DIRTcar Sportsman Series crown continues Wednesday night at the much more compact Weedsport Speedway, but Root watched his closest challengers Janczuk (29th) and Brad Rouse (13th) finished quite a distance behind him while Inman possibly moved up a bit in the current standings.

The race for the title is grueling and continues with three more races this week. 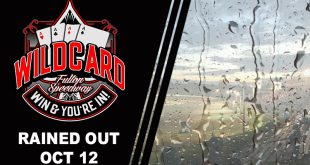