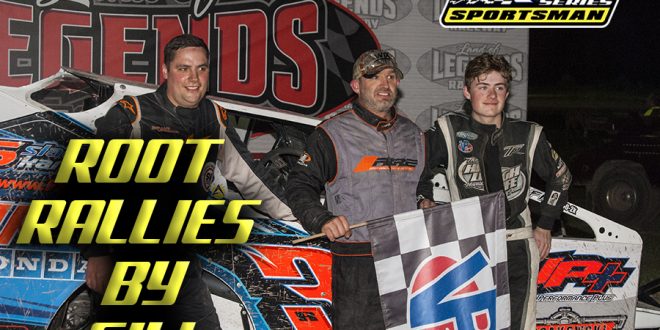 Root Rips It Up for DIRTcar Sportsman Modified Series Win

CANANDAIGUA, NY – June 29, 2019 – After a few rainouts, the DIRTcar Sportsman Modified Series: Central Region finally got underway at the historic Land of Legends Raceway in Canandaigua, NY. It was well worth the wait as the 40-lap Feature only stopped once for a caution flag and incredible wheel-to-wheel racing could be found throughout the field.

Defending DIRTcar Sportsman Modified Series Champion Kevin Root worked his way through the field and got into second position just before the halfway point. Root drag raced pole sitter Jackson Gill down the front stretch and completed the pass. Gill eventually fell to third. Land of Legends Raceway hometown hero Kane Bristol finished a stout second after passing the No. 60.

Last year Kevin Root put the finishing touches on his 2018 DIRTcar Sportsman Modified Series Championship at the season finale Fall Nationals at Brockville Ontario Speedway. Just as he did then, Root jumped on the roof of his No. 34 Sportsman Modified and celebrated victory with his son.

“We have a hot rod this year. It’s not just one person doing this. It’s my crew, it’s my sponsors, it’s my family. It takes a lot of work. I said I wanted a repeat of the DIRTcar Sportsman Modified Championship. It’s a good way to start the year,” said Root in Victory Lane.

During the Top 12 redraw driver interviews, nearly every driver talked about how competitive the DIRTcar Sportsman Modified Series is. Root added, “This is such a competitive Series. You gotta go every night and you can’t have any flaws. You gotta finish every lap and stay out of the rough. I give credit to the track crew. They made the track really racy for us in the Feature and that’s all you can ask for.”

“I just want to thank my family and crew. I can’t do it without them,” Root said with a smile.

Land of Legends Raceway regular Kane Bristol impressed with a second-place win. In fact, over the last ten laps of the race, it looked like Bristol was gaining on the leader Root who was mired in lapped traffic.

Bristol described his race: “I was a little all over the place. I was committed to the middle and high side at the beginning. Then shifted to the bottom. I didn’t feel like I was as good there and shifted back and forth. I can’t complain about a second with these guys [DIRTcar Sportsman Modified Series drivers] here. The track got a lot better throughout the night. I’m just happy to be here.”

Jackson Gill, who came up with a huge win at The Dirt Track at Charlotte during the DRIVEN World Short Track Championships last Fall, started on the pole of the 40-lap Feature. Gill defended well early and built a lead during the first third of the race. However, as the dry slick setups came into their own, Gill started to lose ground.

“We were set up for a rough racetrack and the other guys had setups for the slick. The track got a little bit more black than expected. I can’t be upset about a third-place finish,” Gill said.

Matt Guerreri was disqualified in post-race technical inspection from the fifth position, moving all drivers up one spot in the final results.

Mike Stanton Jr. is the lucky driver from the Feature to pick up a free Hoosier Racing Tire. Hoosier Racing Tire gives away one free tire to whoever finishes in a randomly determined finishing position for each and every DIRTcar Northeast Series race including the 358 Modifieds and Pro Stocks.