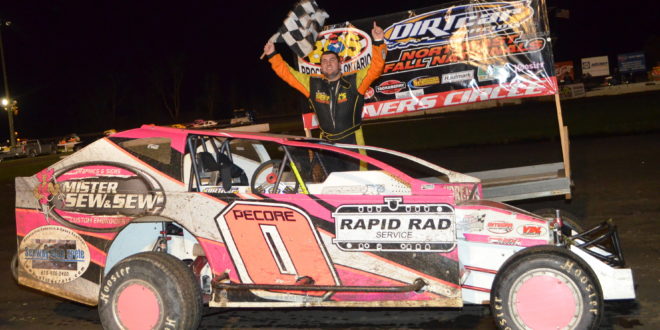 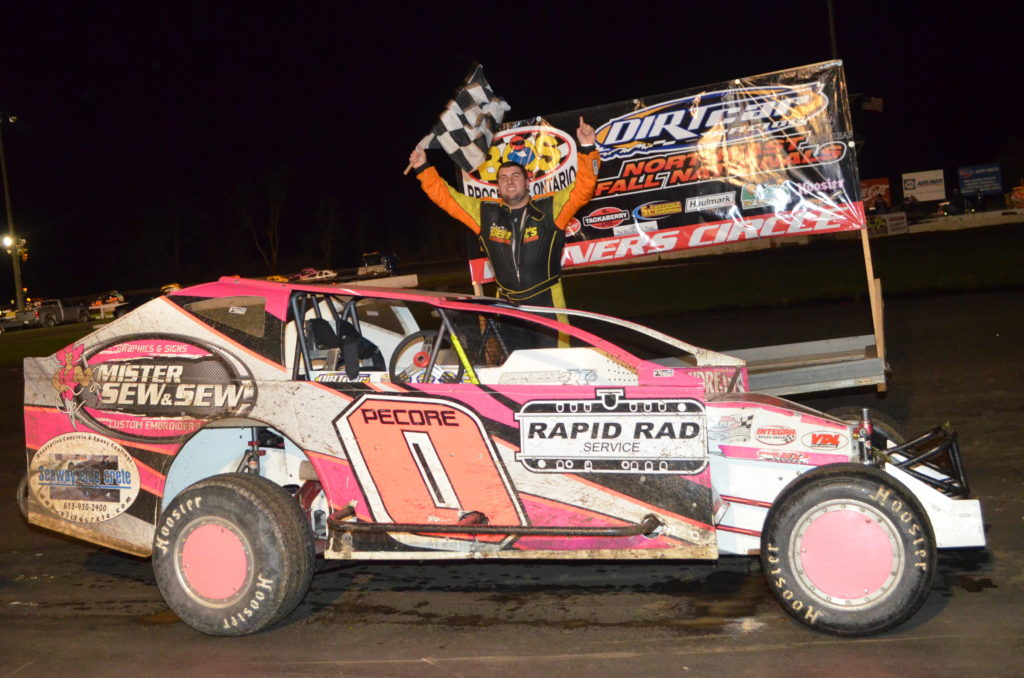 BROCKVILLE, ONTARIO – Saturday, October 18, 2014 – Martin Bélanger, DIRTcar Correspondent – With the DIRTcar Sportsman Modified Series title within reach, Shane Pecore and his race team gave Saturday’s series finale at Brockville Ontario Speedway every ounce of effort they could muster. It paid off with a trip to victory lane in the 1000 Islands RV Centre Fall Nationals feature race, but the win wasn’t enough to clinch the title. Mathieu Desjardins finished fourth and gained enough points to keep the lead and become the 2014 DIRTcar Sportsman Modified Series Champion.

Mike Maresca and Pecore were on the top row of the 50-lap event, Maresca taking the initial lead before point Brad Rouse broke his mount to bring the race’s first caution. Thus ended point runner-up Rouse’s run for the series championship. On the following green, Pecore led the way over Maresca with Corey Wheeler in third.

The caution was thrown on the field for Thomas Cook on lap 3, again slowing the field down. Pecore was back to the lead with Dany Gagne passing Wheeler for third when the green was back on the speedway. Wheeler and John Mills completed the top 5.

A few cars got together in turn 4 and the yellow lights got lit with 12 laps in the books. Maresca surprised Pecore with a charge on the restart as Mathieu Desjardins started to make some noise in sixth. Gilles Godard hit the wall hard and caution was out on lap 18. On the restart, big accident occurred involving several cars, bringing the field to a stop.

Pecore powered to the lead with Desjardins making some great moves to go up to third spot on that restart as Maresca held onto second.

Just before midrace, No. 0 car of Pecore was alone in the lead with Maresca, Desjardins, Wheeler and Gagné, the top 5 at the halfway point. Mathieu Laramee spun in turn 2 and yellow was out with 23 laps to go.

Another accident occurred on the restart with John Mills rolling over, sending the field to a stop for a second time during this event.

The restart took Pecore to the lead with Maresca and Desjardins behind him as Dany Gagne, running fourth, lost his great spot as he went off the speedway with 33 laps in.

The event got some momentum at the end as Pecore led the final portion to capture his second DIRTcar Sportsman feature in front of Maresca and Wheeler. Finishing in fourth, Mathieu Desjardins was able to get the DIRTcar championship by one point over Pecore.

“We had a great car, we ran hard. Winning here at the Fall Nationals is quite something,” said winner Shane Pecore.

DIRTcar Sportsman Modified Series Champion Mathieu Desjardins was really happy: “We worked so hard for this championship, a great way to finish our season, as we are probably moving to Modified in 2015.”