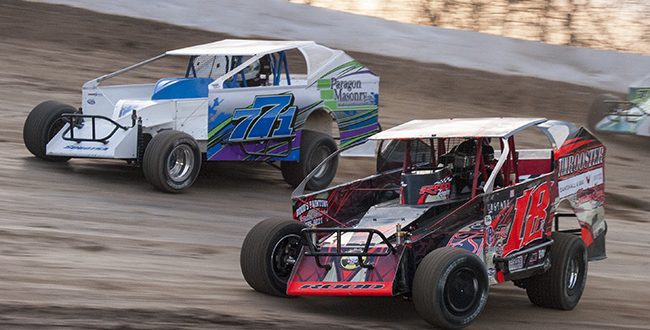 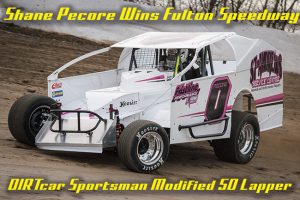 FULTON NY – April 27 2018 – Finally, DIRTcar Sportsman Modifieds all across New York thawed out, loaded up, and made the tow to Fulton Speedway. It took 50 laps to decide the first Sportsman Modified Central Region series race of 2018 and it was worth the long winter break. After trading the lead several times, Shane Pecore in the no. 0 took the lead on lap 23 and never looked back. Despite multiple cautions and restarts, Pecore managed to stay ahead hard charges by Matt Janczuk and Kevin Root.

Shane Pecore slammed the checkered flag on the roof in unbridled celebration and then showed his appreciation to his right rear tire. Pecore told the crowd, “After last year we had an issue and had a lot of doubters. We worked out tails off over winter. We put tons of hours into this thing. I can’t thank my Dad and fiancé enough for letting me do this. It’s pretty special tonight. It puts tears in my eyes after the struggles we had last year.”

Pecore started 6th and made the pass into the lead on lap 9. He pulled away but that wasn’t the end of it. “The top is pretty choppy, but it was fast early. I saw Kevin Root get by on the bottom. I thought maybe that was the race there, but the car felt really good no matter where I put it on the track. Hats off to the track crew after getting two straight days of rain.”

Frustrated second place finisher Matt Janczuk noted, “I love this place. It’s a great challenge.’ Unfortunately Janczuk wasn’t able to threaten Pecore at the end of the race. “Every time I got going in a groove, a caution would come out. It was killing me.” Fulton Speedway Regular Jessica Power thrilled the crowd with a top 5 finish. Powers was knocking on the door of a podium but ran out of laps to make the pass. Dave Marcuccilli passed half the field to make his run, but a broken right front shock took him out of contention late in the race.

The next DIRTcar Sportsman Modified Central Region points race is on June 17 at Utica-Rome Speedway. We’ll see you there!