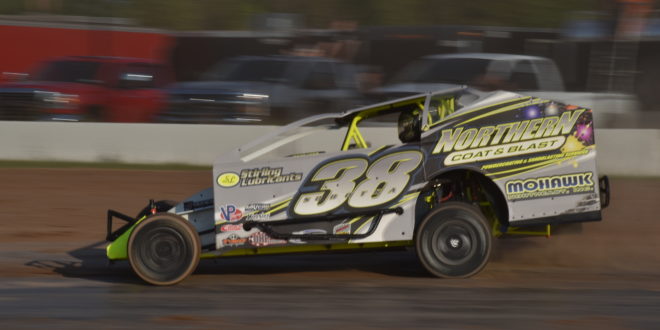 Kevin Ridley storms to the front, Sobotka out of reach in DIRTcar Sportsman Modified Series: Central Division thriller at Land of Legends Raceway

CANANDAIGUA, NY – 30 premier DIRTcar Sportsman Modified Series drivers took the green flag at the historic Land of Legends Raceway and the next flag the field saw was the checkered flying over race winner Zach Sobotka in his stout no. 38 Troyer over Kevin Ridley, Kevin Root, Matt Janczuk, and Paul Guerreri.

After establishing a strong lead in the first half of the race, Sobotka then had to turn up the dial to get through lapped traffic, not knowing where 2nd place was lurking.

“I had no idea what kind of lead I had. I was looking up at the board to see who was second,” said Sobotka.

He managed the lapped cars skilfully but when he saw the 20x show up on the scoring pylon in 2nd, he knew he had to hit his marks and pass the traffic without losing too much time.

With the race running non-stop, the lapped traffic was of very high quality and all of them were racing for their own positions. Patience would be key.

“It was definitely tough especially when they are going 3 or 4 wide down the backstretch,” noted

Sobotka. “You gotta just be patient with them.”

The rising no. 20x Sobotka had noticed on the scoring pylon is piloted by Kevin Ridley. The 10th place starter put on a show for the fans watching at home on LandofLegendsTV.com He muscled his no. 20x machine up on the high side while his competitors used up the bottom and the middle for grip. This allowed him to make huge gains which added up to a 2nd place finish.

Both Ridley and Sobtoka are experimenting with coils for their suspension setups, Although neither were willing to divulge secrets, both claimed not to know exactly how they hit on their podium-finishing setups.

“We missed the set up a little bit in the Heat Race. We made a couple spring changes to the coils, We’re not used to them and just guessed on it. That seemed to work and we rolled the bottom.”

Runner-up Ridley looked brave and lonely tearing up the topside for positions.

“I saw a few cars running up there but our car was right on. We could hit the top and drive off still,” said Ridley. “A couple of other cars could get in and to the middle but couldn’t come off. Once we were by the guys that were running it, it just gave us a clean lane to the front.”

Ridley was pleased with the 2nd place but he still might not know where Zach Sobotka is.

“I couldn’t see how far out he was. I still don’t even know.”

Defending Series champion and Land of Legends Raceway champion Kevin Root moved up from 7th to take the final step on the podium. Root battled hard throughout much of the 30-lap Feature with 4th place runner and last week’s Series winner Matt Janczuk.

Early in the running both Root and Janczuk looked poised to sort themselves out and track down the high-flying Sobotka. But as their battled developed, their hard racing allowed Ridley to close on them in the final stages of the Feature to make his passes.

Local favorite Paul Guererri rounded out the top 5. Notably, there were 4 Guererris in the field and they all finished inside the top 15.

Although a 23rd finishing position is not what driver Brandon Carvey hoped for but luckily for him 23rd was randomly chosen to award one free Hoosier Racing Tire.

The next DIRTcar Sportsman Modified Series: Central Region round is Wednesday, July 1 at Can-Am Speedway.