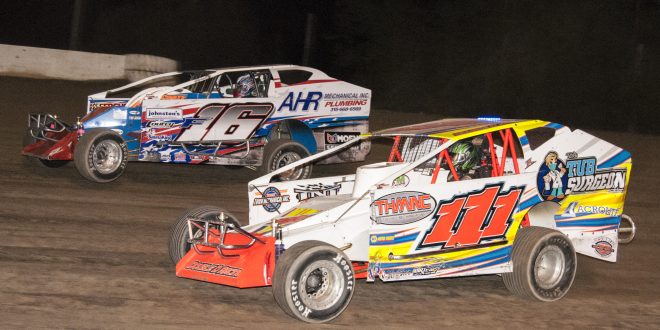 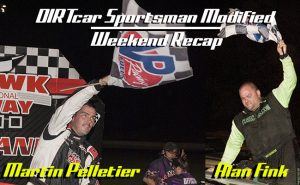 DIRTcar Sportsman Modified Weekend Recap
CONCORD, NC – September 17, 2018 – The DIRTcar Sportsman Modifieds of the Northern and Central Regions squared off for a pair of highly entertaining and unpredictable races at Brewerton Speedway and Mohawk Int’l Raceway September 14-15 respectively. Alan Fink took the Central Region victory at Brewerton Speedway after an incredible battle amongst the top 5. The finish of Mohawk Int’l Raceway’s Northern Region contest ended in equally dramatic conclusion. Coming up next is jammed Sportsman Modified tour schedule as all three regions are in action with two races each September 21-23.
Brewerton Speedway hosted the Duel at the Demon 50 for the Sportsman Modified Central Region tour. Forty-three drivers entered the contest. Pole sitter Chris Mackey jumped to a great start at the drop of the green flag. He led the first 7 laps by a comfortable margin, while the rest of the field battled side-by-side. Mackey continued to lead passed the halfway point, but not without serious challenges from front-runners Will Shields and Kevin Root.
On lap twenty-seven, the race whole race changed. Jackson Gill came to a stop a stop on the backstretch and brought out the caution. On the restart Alan Fink passed two cars in one lap with a spectacular slide job move in turn 1. Fink held on through a late race restart for the Central Region victory. “I just went in there and they were beating up on each other. I could hold it down just enough where I wouldn’t slide up and get into them. I was expecting another one coming right back in the next corner,” Fink said in Victory Lane.
Alan Fink knew he had to go for it with the slide job to have a chance at the win and it paid off big. “That was pretty good. It’s tough to drive around Kevin and Chris is up front, I started in the back from a crappy redraw. I had to wait for these new tires we put on to get going. Once they did, it really took off.”
Second place and Central Region points leader Kevin Root couldn’t hide his disappointment, “Second kinda sucks but we’ll take it. I changed up my line after he got around me. I started to reel him back in. He had my line where I needed in 3 and 4 and I thought we were better than him in turns 1 and 2. That’s racing.”
Root is focused on the points and winning Championships, in Victory Lane he noted, “Good point night for us. We are leading the Central Region and we got the [Fulton Speedway] Track Championship here. We’re chasing Mr. Dirt this year and I think my team can do it.”
Cory Barker raced hard through the field and grabbed the final podium position from Chris Mackey late in the race. “We can’t complain at all for a car that we’ve maybe run ten times. We’ve gotten quite a few top-5s, 2 wins in it. I’ll tell you Chris Mackey is a heck of a driver and he was really putting up a battle.”
The next Sportsman Modified Central Region tour stop is the double-header at Fonda Speedway Friday and Saturday, September 21-22.
The Mohawk Nationals hosted one of the biggest races of the DIRTcar Sportsman North Tour as the 5th edition of the Pete Mitchell Memorial was run. Martin Pelletier collected the $4,000 to win purse after a wild finish involving the front five.

Even if he pocketed $4,000, Pelletier was not smiling as he explained the finish: “Marcucilli got side by side with me as we raced with the 71-car, they got together, and he hit the tire, it is very unfortunate to finish this great race that way’’ Pelletier. The driver of the 92p will aim for win number twenty-five next weekend. ‘’Yes we will try hard and try and a get a win down there’’ finished Pelletier.
Joining Pelletier was Adam Pierson: ‘’The track rubbered up at the end, I didn’t see the incident, I was happy with fourth but will take second even though it not the best circumstances’’ said Pierson.
Jessica Power and Martin Pelletier led the field of 31 drivers to the initial green of the Pete Mitchell Memorial feature with Power to the lead over Pelletier as Thomas Cook was in third. Pelletier picked up a good momentum on the high lane and passed Power for the lead on lap 7 just before Ricky Thompson brought the caution on the same lap.
There was a good battle on the restart as both Pelletier and Power ran side by side during a few laps as Pelletier took back the lead. Cook and David Marcuccilli had a good fight for third as the feature hit lap 20.
With one quarter of the race completed Pelletier, Power, Cook, Marcuccilli and Adam Pierson were the front five. The top groove began to let up a bit as Pelletier started to venture to the bottom of the speedway while still leading. Cook passed Power with Pierson for fourth. Adam Rozon saw a top 10 run vanished as he slowed the field down on lap 33.
Pelletier continued to lead as Jackson Gill joined the top 5 on a lap 39 restart, Cedric Gauvreau hit the wall in turn 3 and yellow lights were on.
The lap forty-seven restart gave a good boost to Marcuccilli as he used the top of the surface to jump to second by passing Cook and Power. The yellow flag came out on lap 54 for a special 10-minute competition stop in honor of Pete Mitchell.
The race resumed on that same lap with Pelletier remaining in front as Pierson took fourth place from Power. A serious accident occurred underneath the flag stand as Ricky Thompson, Junior Delormier and Bucko Branham got together with Branham rolling several times. All three drivers were ok but all three cars had heavy damage. The red flag was out on lap 59.
When racing action resumed, Pelletier stayed in front as Jackson Gill tried the top and gained some ground but couldn’t make the move on Cook stick for third.
The top 2 pulled away from the field as Marccucilli was on the back bumper of Pelletier. Cook and Gill got together on lap 83 and Cook was knocked out of contention.
The finish was wild as Marcuccilli got side-by-side with Pelletier for the lead with 1 lap to go. Both drivers caught a lapped car in turn 4, racing towards the checkered flag. Marccucilli had nowhere to go and he caught the yuke tire sending him near the wall on the front stretch. He got hit hard by Jackson Gill with Brianna Ladouceur getting sent on her roof.
Pelletier collected his 24th win of the season over Adam Pierson and Marcuccilli in third.

The Northern portion of the DIRTcar Sportsman will close out next weekend with a double-header in the province of Quebec with visits to RPM Speedway on Friday, September 21 and Autodrome Drummond on the following night. Each race will be 50 laps in distance.