Second-generation standout Ryan Susice continued his season of firsts as he collected the biggest win of his budding career Sunday afternoon in the Hoosier Tire-VP Racing Fuels Mr. DIRTcar Championship Series ‘Gater Racing News/Motorsports Expo 30’ to close out the Sportsman portion of the 24th Annual Fulton 200 Weekend at Fulton Speedway.

“This is my most memorable win ever,” declared Susice, 19, who fended off a late-race rally by defending overall Hoosier-VP Mr. DIRTcar Champion and current points leader Chris Raabe, with just a single car-length separating the youthful pair under the checkered flag. With just a half-dozen events remaining on the ’09 schedule, four-race winner Raabe holds a 52-point advantage over Susice heading down the stretch.

“We’re having a great year no matter how the points end up. I don’t mind finishing second, this is our 11th win and along with a couple track championships it can’t get too much better,” figured Susice, who also took high point honors at his hometown track of Ransomville (NY) Speedway, the site of a Street Stock points title in 2007.

Syracuse qualifier John Pietrowicz settled for a solid third-place showing ahead of Matt Hulsizer and Tom Juhl Jr. to round out the top-five in a race that was slowed by five cautions and a red flag to push it past a half-hour on a cool and partly sunny afternoon in Central New York.

Despite rain on Friday postponing the event until Sunday, a big field of 61 Sportsman racers signed requiring six qualifying heats and a trio of consolation rounds to set the 32-car feature line-up. Only the heat winners redrew to establish the top-three rows, and it was heat two victor Billy Clark Jr. charging ahead of pole-sitter Alan Fink to grab an early lead in the 30-lap headline event.

The initial circuit brought a scare to Team Raabe as he caught a rut in turn four yet managed to straighten out his sideways mount just in time to avoid a costly pile-up as the trailing pack bogged down behind him. Clark had little trouble up front as Pietrowicz and Juhl diced for second ahead of Fink and recently crowned Fulton points champ Tim Sears Jr.

Canadian B.J. Willard (lap 4) and Sears (lap 7) looped their Bicknell machines to force a pair of early caution periods and it was on the second restart that Juhl blasted high to overtake Clark for the top spot. A third of the way through Juhl held a comfortable lead over Pietrowicz and Susice with Clark fading back to fourth ahead of local favorite Matt Hulsizer, a two-time winner at Fulton in ’09.

The biggest stretch of green flag laps opened the door for Juhl to reach traffic by lap 19, and just two laps later Mark Davison spun to collect Jim Spano while the leaders reacted quickly to avoid the minor altercation between turns one and two. With the yellow already out, Canadian invader Brad Rouse lost a wheel in turn four to extend the third caution period with 10 laps still to go.

After Fink found himself facing the wrong way low in turns three and four, Pietrowicz pounced on the chance to grab his first lead with a inside move putting him first at the end of lap 24. Waiting for his own chance to gain a position, Susice secured the runner-up slot the next time around before nosing ahead for the final change on lap 26.

Just as the leaders crossed the stripe side-by-side, Christine Martin came to a stop exiting turn two and a rare red flag was thrown soonafter. With power steering fluid discovered around the track, Martin was treated for the hot liquid that had penetrated the cockpit and trip in the track ambulance was mandated as a precautionary measure.

On the ensuing lap 27 restart, Raabe bolted from fifth to fourth then grabbed the show position with two to go just as the fifth and final yellow flag waved for the spinning mount of Brandon Sweet. Raabe was not quite finished as the ‘Teenage Tornado’ went high around Pietrowicz when the green lights returned on lap 29, before creeping up to Susice’s rear bumper as the checkered flag finally unfurled.

“I started 12th and didn’t thing we had a car to win, it was kind of normal in the heat but my dad just tweaked it a bit for the feature,” remarked Susice, as he posed alongside his no. k38 Investor’s Service Company-Philpac Packaging/Bicknell entry for the first time ever in Fulton’s victory lane. “The bumps seemed like they were working themselves out, I was running right through them and it was working real good.”

“I noticed the top side started pushing off and everybody was either running way up high or really down low. There were so many bumps in the middle lane that it had hardly been used and there was a lot of bite. On that second to last green I started catching the leaders, even ran three-wide, and kind of figured turn four was gonna dust off. I thought I could get Tommy (Juhl) on the front stretch but I didn’t really know what I had for the no. 85 car, he was fast and runs here pretty regular. I guess he just pushed up and I had the bite in the middle and shot it straight,” added Susice, who was joined in the winner’s circle by his father Roy Susice, a former DIRTcar Modified racer in the 1980s with four Sportsman feature wins scored in 1987.

Adding his third runner-up finish of the ’09 Sportsman Series campaign, Raabe dropped only five points to Susice on the night to keep his second straight Mr. DIRTcar crown clearly in sight.

“Another lap or two I might’ve had something for him, just ran out of time,” said a modest Raabe, 18, following his eighth top-five finish in 13 point races steering the potent McColman Racing no. 01 Scott Industrial Services-Kingston RV Centre-Tyroute Communications/TEO mount. “It was tough fighting back after saving it on that opening lap. Found out later that most of the bite was in the holes so that’s how we made up ground in a hurry at the end.”

Raabe and Susice will go at it again in the next event along the Mr. DIRTcar Sportsman Championship trail slated for Can-Am Motorsports Park on Wednesday, October 7 as part of the Super DIRT Week XXXVIII festivities.

SKIDMARKS
Raabe Ready To Reign: Only two drivers have claimed two championships while just one has captured back-to-back titles in the Mr. DIRTcar Sportsman Championship since the series was launched in 1990. Canadian standout Chris Raabe is on the brink of joining that elite group while becoming the second to claim two straight. Russ Hefti (2005-06) and Steve Hall (1996 & ’98) comprise that small list with Raabe facing a half-dozen more extra-distance events before he can complete the trio.

Panunte Progressing: Greg Panunte went into the series race at Canandaigua Speedway on Sept. 18 with a 25-point lead in the Mr. DIRTcar standings. The veteran Sportsman campaigner from Port Colborne, Ont. left the Ontario Co. Fairgrounds in a helicopter and missed the next two events recovering before doctors gave him clearance to compete again in time for Fulton. Following a crash at Canandaigua that required a ‘mercy flight’ to a hospital in Rochester, Panunte had his knee in a wrap from a fracture while his neck and back remained sore. He was initially air-lifted complaining of fuzzy vision in his left eye while his left arm and hand went numb. All tests turned up negative during the two-hour stay, although at the time he contemplated hanging up his helmet for good with the realization setting in that things could have been worse. Panunte came out strong at Fulton with a heat win before finishing 12th and trying to regain his winning form in time for the Super DIRT Week specials.

UPCOMING EVENTS
Teams contending in the 20th Mr. DIRTcar Sportsman Series return to action in just three more days as Super DIRT Week XXXVIII (Oct. 7-11) activity opens up at Can-Am Motorsports Park on October 7 with round number 15 of the 19-race tour taking place. The week closes out with a doublehader at Rolling Wheels Raceway Park on Friday before wrapping up Saturday, October 10 on the Syracuse Mile. 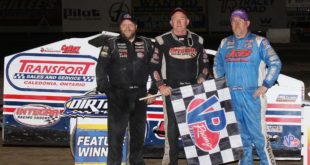