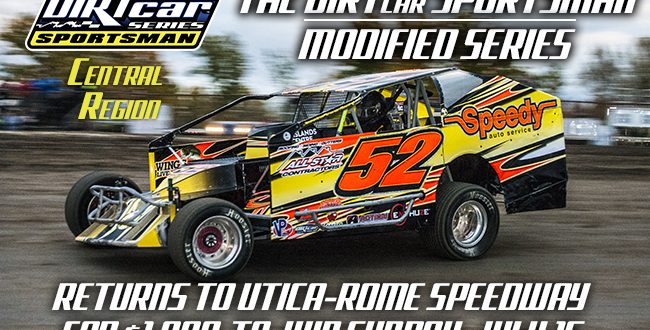 Will Kevin Root Begin his Championship Defense with a Win at Utica-Rome Speedway Sunday, June 16?

VERNON, NY – June 3, 2019 – For the eleventh time in DIRTcar Sportsman Modified Series history, the stars and cars of the Series will return to the great half-mile Utica-Rome Speedway looking for a $1,000 top prize. Last year the reigning Series Champion Kevin Root walked away with the checkered flag. Race fans are eager to see if the No. 34 can repeat in 2019 starting the Central Region opener, Sunday, June 16 at famous the Vernon, NY speedrome.

The DIRTcar Sportsman Modified Series Central Region was supposed to kick off the season at Fulton Speedway with the High Bank Holdup 50, but it was rained out. A tremendous field of Sportsman Modifieds is expected to descend on the Eastern New York race track to ring in the year.  With the new $1500 point fund for each region, the teams will use this event to get off to a fast start.

The Community Car Wash and Pioneer Window Manufacturing Corporation presents the $1,000 to win DIRTcar Sportsman Modified Series race marks the start of the road to Brockville Ontario Speedway for the Championship finale.

Tour regulars will have some tough local competition such as 2018 Utica-Rome Speedway DIRTcar Sportsman Modified Track Champion Matt Janczuk. In fact, he’s already off to a flying start as he took a trip to Victory Lane on opening night. A.J. Filbeck finished second in Utica-Rome points last year, so he’ll be another hometown hero for fans to watch.

With names like Jackson Gill, Charles Tibbets, Alan Fink, Zack Sobotka, A.J. Miller, Jeff Taylor, Rocco Leone, Jessica Power, and so many others in the field, fans will see an exciting Feature event.

The night is full of DIRTcar racing with the DIRTcar 358 Modifieds and DIRTcar Pro Stocks also on the card. All three divisions will be racing for valuable Hoosier Racing Tire Weekly Championship points.