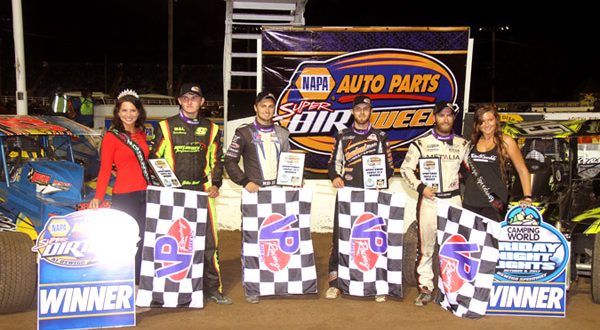 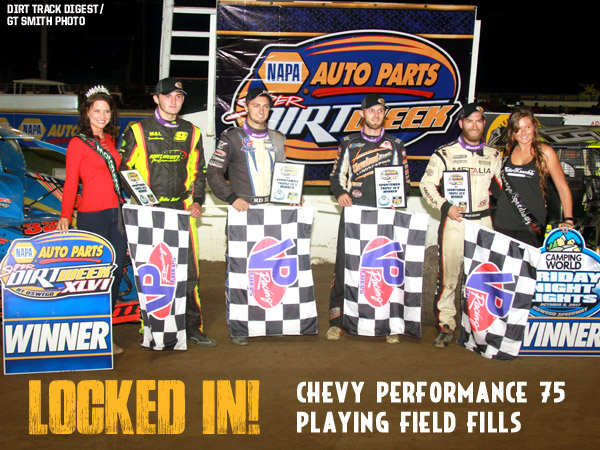 Oswego, NY – October 6, 2017 – With the lights on at the Oswego Speedway for the Camping World Friday Night Lights at NAPA Super DIRT Week, the DIRTcar Sportsman Modifieds took center stage first with four 15-lap qualifiers transfering the top four into Sunday’s Chevy Performance 75 Championship. Of the six drivers locked in from time trials, Rocky Warner was the only one to assume his starting position from the front row. Dave Marcuccilli and Adam McAuliffe opted for the rear of their qualifiers, while Matt Farnham, Glenn Forward and Kevin Root did not take the track at all.

Polesitter Marcuccilli opted for the rear and used Qualifier 1 as a test session for Sunday’s Championship. Warner, who is also locked into Sunday’s Feature, led the first 11 laps before heading pitside with an overheating No. 1J machine. Tyler Trump inherited the lead and went on to win the first qualifier.

“We’re set for Sunday. We have a good racecar. I can’t wait,” said Trump.

Automatic qualifiers Farnham and Forward did not make the call for Qualifier 2. Ron Davis III turned away an early challenge from Todd Root and ran away with the second qualifier. Davis took the checkered 4.441 seconds in front of second place Root. David Schilling and 10th-starting Robert Bublak, Jr. transferred to Sunday’s Championship event.

“This is definitely a good start for us heading into the weekend,” said Davis III, who is also competing in the DIRTcar 358 Modified divison.

Kevin Root, who was scheduled to start on the pole, did not make the call for Qualifier 3. Connor Cleveland started on the pole and was never challenged going on to win by 3.615 seconds over Jackson Gill, Will Shields and Corey Barker. Gill, Shields, Barker and Tom Collins, Jr had a spirited battle around the 5/8th mile dirt oval for the final transfer.

McAuliffe opted for the rear in the fourth and final qualifier, giving Alex Lajoie the pole. Lajoie was never challenged and went to on win by 6.392 seconds. Last year’s Futures winner, Brianna Ladouceur, held off a pack of cars to finish second and transfer to Sunday’s Championship event. Martin Pelletier and Jeremy Pitcher also transferred.

Lajoie didn’t know how large his advantage was. “The car felt good,” he said. “We feel comfortable heading into Sunday’s action.”

The Sportsman Modifieds will have their Last Chance Qualifiers tomorrow afternoon. The transfer cars from the LCQ and Provisional Starters will set the full starting lineup for the Chevrolet Performance 75 Sunday afternoon.