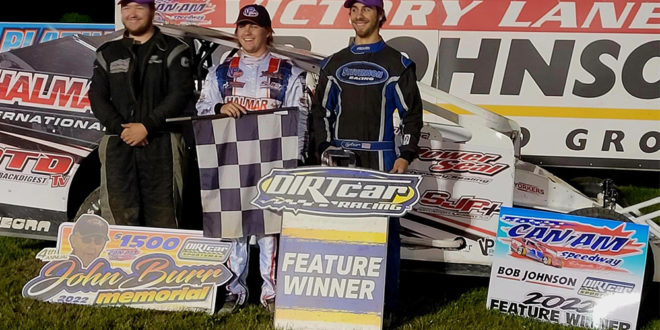 Yards away from the finish line with the checkered flag adding color to the night sky, Tyler Corcoran and Gavin Eisele were side by side, in tandem, exiting Turn 4.

With every inch they crept forward, eyes widened around Can-Am Speedway Friday night for the DIRTcar Sportsman Northern Region race. Their bumpers stayed even for one second, two seconds, three… then Corcoran found an extra push of momentum before the flag stand to beat Eisele by 0.142 seconds.

“Man, I was on the edge of my seat for that one,” Corcoran said. “That was incredible. Gavin and I were chatting down in Turns three and four before doing that run and he asked where I was running and I said, ‘All over the place.’ Starting ninth, you have to go where they’re not.”

It took him 24 laps before he got to the lead in the 30-lap race, after starting ninth. At the start of those 30 laps, there was a three-wide battle for the lead at the start of the race with Dustin Bradley coming out on top to take the early lead.

The first caution of the race flew on Lap 11. When the race commenced, Eisele raced his way around Bradley for the lead on Lap 12.

Nearing 10 laps to go, Eisele fell under attack from Eric Nier. However, before Nier could challenge, a red flag flew for a car flipping on the front stretch.

After the short break, Eisele took the lead and ran away on the restart, while Corcoran continued his charge forward and moved into second. Then, while running the top, he closed to Eisele’s bumper with six laps to go.

Every lap, he inched further and further alongside the outside of Eisele down the front stretch. One lap Corcoran had the advantage. The other, Eisele. Neither’s line looked to be more superior than the other.

However, Corcoran found the extra bit of speed he needed off the top of Turn 4 on the final lap to pull ahead by a bumper at the finish to win the John Burr Memorial.

“The last couple of years, that’s where I gained a lot on these guys,” Corcoran said. “I’d just go into (Turns) three and four and just have that thing stick, and the drive I get out of that corner is just unreal.”

For Eisele, he was left wondering if he needed one lap less or more to steal the win from Corcoran.

“It was great racing with Tyler,” Eisele said. “The clean racing was fun. Unfortunate with the outcome, but still a great night overall.”

Tyler Stevenson rounded out the podium with Nier in fourth and David Rogers in fifth.

The next DIRTcar Sportsman Norther Region event will be Saturday, Sept. 10 at Autodrome Drummond as the 50th NAPA Super DIRT Week at Oswego Speedway (Oct. 3-9) nears for all regions. For tickets to Super DIRT Week, CLICK HERE.