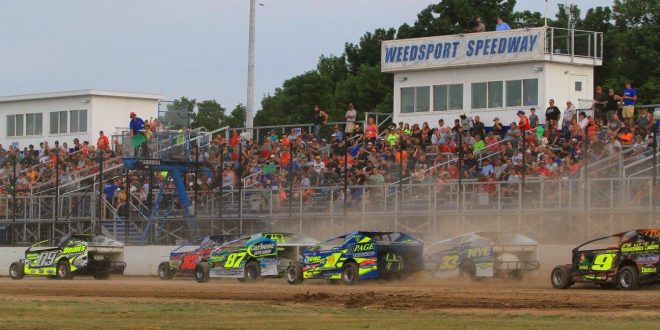 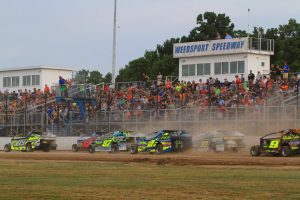 WEEDSPORT, NY (June 28, 2017) – The 4th annual Sportsman Classic, presented by Industrial Tire of CNY, takes place this Monday, July 3 at 7 p.m. and with $2,500 on the line for the winner in a 75-lap feature format, the annual Classic is becoming a summer tradition for fans and racers.

The best in Sportsman racing have been coming to Weedsport on Fourth of July weekend in search of a Classic victory since 2014, when James Michael Friesen became the first driver to win the 75-lap crown jewel.

Friesen topped Sportsman superstars Rocky Warner and Dave Marcuccilli for the win that year, with the Classic becoming an instant hit.

One year after falling just short in his bid for victory, Marcuccilli came back strong in 2015, out racing Steve Gray, Adam Hilton, Todd Town, and Mike Maresca for the $2,500 Classic win.

Marcuccilli has laid claim as the most successful driver in Classic history having finished in the top five in all three Classics, with one victory – the only driver to do so.

Friesen, Gray, Hilton, and Robert Bublak Jr. are the only other drivers to have finished in the top ten of the 75-lap Classic on more than one occasion.

Initially slated for a 6 p.m. start, officials have decided to bump the program back one hour to allow more time for fans to make their way to the speedway. Pit gates will now open at 4 p.m. on July 3 with grandstand gates opening at 5 p.m.  Hot laps will begin at 6 p.m. with opening ceremonies set for 6:45 p.m.The 75-lap, $2,500 to win crown jewel will mark the second event of the Beyea Custom Headers Sportsman Shootout Series for 2017.

This year all the heavy hitters are once again expected including Davis, Marcuccilli, Kevin and Todd Root, Warner, Jeremy Pitcher, Kevin Ridley, and more.

Included in the night’s schedule will be the TUSA Mod Lites and the NY6A 600cc Micro Sprints. A huge fireworks display will cap off the Independence Day Weekend for fans in attendance.

Industrial Tire of CNY is a family-owned and operated company funded by Dennis Beaudette over a decade ago, and will continue to be in the family name for another generation with Dennis’ two sons, DJ and Marty following in their father’s footsteps.

With 24/7 road service, Industrial Tire of CNY can help with many of your tire needs including rim reconditioning, mounting/dismounting, foam filling, bead repairs, agricultural tire repairs, and more. Call Industrial Tire of CNY today to schedule an appointment or to learn more at (315) 399-5335. Be sure to also visit online at www.industrialtirecny.com.

About Weedsport Speedway: Purchased in 2013 by Al Heinke, Weedsport Speedway has returned to a real racers track, providing a complete venue for racers, their families and friends, and for the fans looking for motorsports entertainment.  Officially opened for the first time on July 24, 1955 – the Weedsport Speedway 3/8 mile dirt oval has produced a legendary list of drivers and champions including Will Cagle, Danny Johnson, Bob McCreadie, Alan Johnson, Jack Johnson, and Dave Lape to name a few.  Today the facility welcomes the best of the best in dirt short track racing from the Craftsman World of Outlaws Sprint Car Series to the Super DIRTcar Series Big Block Modifieds along with the DIRTcar 358-Modifieds, Sportsman, Pro Stocks, and more.  While racing entertainment is the focal point, Weedsport Speedway has gone the extra mile in welcoming Weedsport Productions, which brings the facility full circle with a dedicated digital entertainment team for web, television, and on site screen usage.