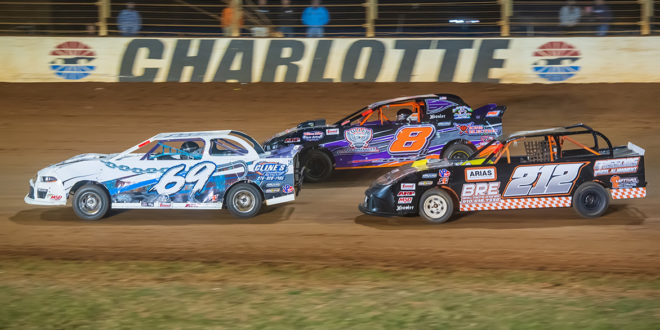 Matt Gilbert, Ronnie Johnson, Stacy Brock, and Logan Richey won each of their respective Heat Races, while 14 others transferred with them.

HEAT RACE 1
Matt Gilbert had the performance of the night, making his way from last to win in Heat Race 1.

A pileup on the first lap played a big role in that move. The accident ended the night early for competitors JR Warren, Ken Appleton and front-row starter, Jason Adams.

That then left the door open for Gilbert and other to make an easier charge forward and try to lock into Saturday’s Feature.

Gilbert grabbed the checkered flag, with a dogfight for the transfer spot behind him. In the end, Travis Mosley, Michael Webb, and Marcus Hughes joined Gilbert in being locked into the Saturday night’s Feature.

HEAT RACE 2
After some shuffling of positions in the first few laps of Heat 2, the top four found their place by the halfway point and comfortably maintained them to the end.

Ronnie Johnson bagged the win, with Austin Brown in second, Brent Couch in third, and Billy Cline rounding out the locked-in cars.

The opposite occurred for his early race competitor, Dustin Bolin, who suffered an issue and dropped to the rear. That helped open the door for a new challenger to find their way into a transfer spot.

HEAT RACE 4
Heat Race 4 saw the night end early for several competitor as a parking lot of cars formed in Turn 2 due to one car spinning and others having nowhere to go.

When the race went back to green flag racing, it was nothing short of a war between the drivers around the final transfer position. Logan Richey drove like he was shot out of a cannon, going from row three to the lead in a matter of two laps.

While he sprinted across the finish line for the win, there was a photo finish for the transfer spot behind him.

Second went to Josh Bryant, who almost spun on the last lap – which could’ve sent him to the Last Chance Showdown. Third was Jesse Richardson Jr., and the last transfer driver was Tyler Riddle.

If you can’t make it to the track, you can watch every lap of the World Short Track Championship live on DIRTVision – either at DIRTVision.com or by downloading the DIRTVision App