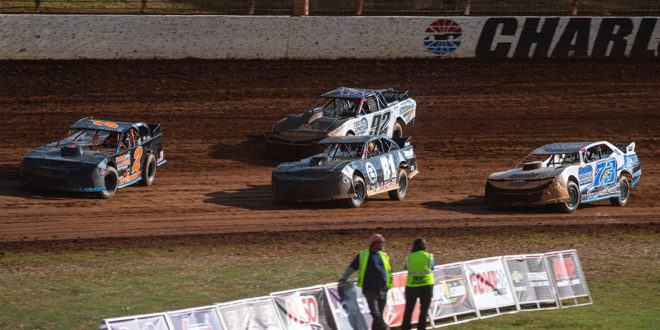 Forty-four SRI Performance Thunder Bombers were split between four Heat Race Friday night to lock 16 of them into Saturday’s World Short Track Championship finale at The Dirt Track at Charlotte.

The top four drivers from each six-lap Heat Race transferred to Saturday’s inaugural Feature for the division, while the rest of the field will have one more chance to race their way through Last Chance Showdowns.

Here is how the four Heat Race played out…

HEAT RACE 1
After a couple of cautions hindered the start of Heat Race 1, Greg Carroll pulled ahead with the lead while, the field behind him went five-wide for second place through Turn 1.

The epic battle for the runner-up spot ended a lap later when one car spun in Turn 3 to bring out another caution.

When the race resumed, Carroll pulled ahead of the field again with Tyler Guice finding his way into second without having to duel four other cars for it.

With no more cautions disturbing the flow of the race, Carroll saw the checkered flag first, while Guice finished second, Blake Bently was third and Stetson Todd secured the final transfer spot.

The theme of several cars going for the same territory continued in Heat Race 2 with a three-car battle for the lead on the first lap. That ended up biting polesitter Brandon Satterfield as the close races caused him to spin in Turn 4 on the first lap.

That then resulted in a new three-car battle for the lead between Isaiah Parker, Jonathan Hinson and Grant Parr.

After Satterfield’s spin, Parker dove underneath Hinson on the restart to take the lead. But before he could get far, another caution came out. When the green flag flew again, Hinson looked high and Parr looked low, considering a three-wide pass for the lead.

Hinson proved be the strongest, powering around the outside of them both. Ran raced ahead with the lead and looked to have the race won. But on the last lap, last corner, he bobbled, losing speed and allowing Parr to pass him for the win.

The top four ended up as Parr, Hinson, Satterfield – making a charge back into the top four – and Parker.

Knight held on to his bumper for the first few laps, trying to plan an attack to reclaim the lead. But Funderburke was too strong. With six clean laps, Funderburke scored the win in Heat 3.

HEAT RACE 4
A multi-car accident hindered the initial start of Heat 4, but once the race found traction, the battle for the lead was endless.

Jerry Mckeel Jr. and Nate Jackson dueled for the top spot, trading it on multiple occasions. However, while they did so, Steve Greene kept the rocket boosters on high with his #39 car.

Running the low line, Greene passed both drivers with ease and soared away with the win.

Mckeel and Jackson also feel victim to Mark Towell, who moved up to second by the end of the race.

At the conclusion of the Heat, Greene was scored the winner, Towell was second, and Jackson third. Mckeel initially finished fourth but was disqualified for having an illegal ignition. Fifth-place finisher David Stone was also disqualified. That moved John Williams into the final transfer spot.

UP NEXT: The SRI Performance Thunder Bombers will run their Last Chance Showdowns and 20-lap Feature on Saturday, Oct. 29, at The Dirt Track at Charlotte. For tickets, CLICK HERE.

If you can’t make it to the track, you can watch the full day of racing, starting at 4pm (ET), live on DIRTVision – either at DIRTVision.com or by downloading the DIRTVision App.