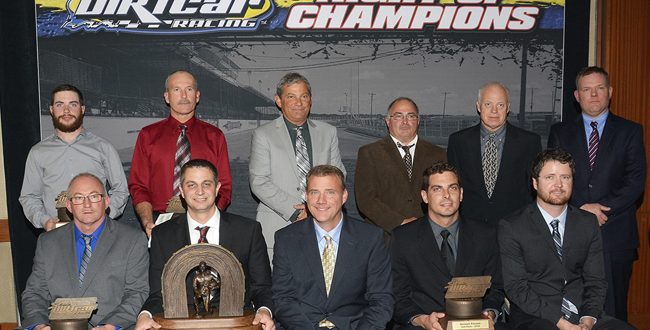 SYRACUSE, N.Y – Nov. 22, 2016 – The 2016 season came to an end with the completion of the 2016 DIRTcar Northeast awards ceremony Saturday night. This year’s banquet was full of familiar faces as drivers, sponsors and promoters were recognized and champions were crowned.

The Night of Champions kicked off with the recognition of the Mr. DIRTcar champions. Throughout the year, DIRTcar Racing distributed nearly $300,000 in point fund awards, thanks to contributions from Hoosier, VP Racing Fuels and all of the marketing partners. For the sixth year, the Mr. DIRTcar Home Track Points Championship pitted racers throughout the Northeast against one another based on their best 16 finishes in their respective division at any DIRTcar sanctioned track. Saturday night the 2016 champions were honored and recognized for their efforts and success.

Brad Rouse captured the 2016 Mr. DIRTcar Sportsman Championship. With 13 feature wins coming from Merrittville and Humberstone Speedway, Rouse pocketed $1,000 from the point fund as well as a $750 in fuel certificate from VP Racing Fuels.

David Hebert picked up his fourth, third in a row, Mr. DIRTcar 358-Modified Championship this season. Hebert collected 10 wins on the season, which included triumphs at RPM Speedway, Autodrome Drummond and Autodrome Granby. Hebert received $3,000 from the point fund and a $1,000 fuel certificate from VP Racing Fuels.

“This one obviously feels good. It’s very sweet for so, so many reasons,” said Matt Sheppard. “[Shane Andrews was] talking a little bit about visionaries earlier, and last year I had a little vision of my own. That vision included crew guys, sponsors, manufacturers and people that want to win races, and have won races before. Those are the type of people we put together this year. We couldn’t do it without those people. It just really was a storybook season from start to finish.”

Following the Mr. DIRTcar champion recognitions, winners were chosen for the Motorsports Safety Systems / Number One Speed /G-Force Rookie of the Year Awards. These drivers are the next great stars in DIRTcar racing and were recognized for their talent this season.

The 2016 Pro Stock Rookie of the Year went to Justin Desrosiers as he competed in twelve events, finishing in the top ten five times.

Zach Sobtoka, from Mexico, N.Y., finished 23rd in the Sportsman series points and captured five top fives at his home tracks of Brewerton and Fulton Speedways. Sobtoka is this year’s Sportsman Rookie of the Year.

“I really learned a lot this year,” said Max McLaughlin. “I can’t thank HBR enough. This is one of the toughest series, competition-wise, you’ll see. I’m just glad to be a part of it.”

Jocelyn Roy, from St. Helene, Quebec, accepted his second DIRTcar Pro Stock Series title Saturday night. Roy may not have made it to Victory Lane in the series this season, but consistency was key as he picked up the championship not only with DIRTcar but also at his home tracks Autodrome Granby, LeRPM Speedway and Autodrome Drummond.

Accepting his first ever DIRTcar Sportsman Modified title, Shane Pecore, from St. Andrews, West Ontario, was all smiles in front of a packed house. Pecore was not only able to capture two DIRTcar Series wins this season towards the 2016 title, but he also picked up the Brockville Speedway and Cornwall Motor Speedway Championship.

Former DIRTcar Sportsman Series champion in 2008 and 2009, Chris Raabe made his way back on stage to be recognized for his accomplishments, but this time it was for the 2016 DIRTcar 358-Modified Series Championship. The driver out of Napanee, Ontario, who won six 358-Modified features throughout the season, was unable to park it in Victory Lane during any series event this season. He was persistent with two top-fives and four top-ten’s. Raabe also picked up the 358-Modified Track Championship at Cornwall Motor Speedway.

Sheppard, out of Waterloo, N.Y., had what many would call a dream season. His new self-owned team combination proved that they were a force to be reckoned with by winning 12 races with 21 top-fives and 22 top-ten finishes out of 26 starts. The No. 9s team also won 17-heat races, recorded fast time seven times, and had a total of 18 podium finishes.

The 2016 Promoter of the Year Award went to Weedsport Speedway for their hard work and extraordinary dedication this season. Al Heinke, Jimmy Phelps, Shannon Phelps and Andy Phelps were honored.

“This is a shock to us. We didn’t expect this,” said Jimmy Phelps. “We’re all fortunate to be a part of this.”

For the second year in a row there was a drawing for a 602 Chevrolet motor, the winner was Brianna Ladouceur, a competitor in the Sportsman Modified division. Ladouceur made history at the 45th Annual NAPA Auto Part Super DIRT Week when she became the first woman to win an event at Super DIRT Week, taking home a triple 15 qualifying event.

The Big-Block Modified Super DIRTcar Series will resume action in 2017 in February in Florida at the DIRTcar Nationals at Volusia Speedway Park with four non-point races. Tickets can be purchased now by visiting dirtcar.ticketforce.com.