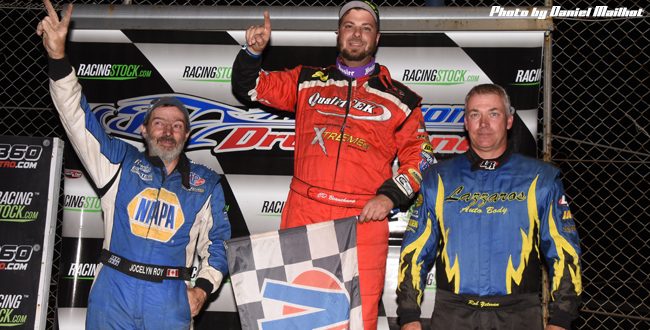 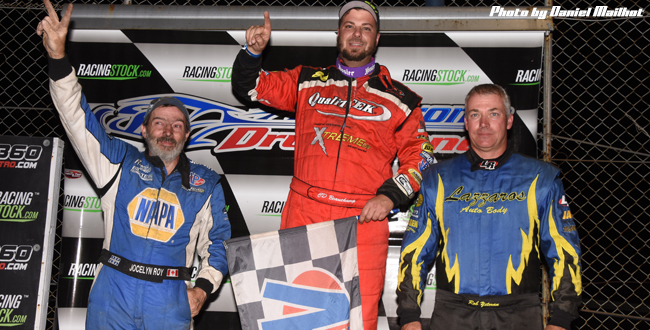 The DIRTcar Pro Stock tour top-three from Autodrome Drummond on July 29 prior to post-race technical inspection.

Drummondville, QC, CAN – July 29, 2017 – Last-minute decisions can pay off sometimes. CD Beauchamp decided on Saturday morning to travel to Autodrome Drummond for the DIRTcar Pro Stock tour event. He took the lead in the early portion of the Feature and resisted a last minute charge to claim the win. Unfortunately, Beauchamp was disqualified in post-race technical inspection. Second-place finisher Jocelyn Roy was declared the winner.

“I really thought I was alone, I saw Roy pulling next to me and I said ‘uh oh’, but I was able to win,” Beauchamp said. “I will try again (Sunday) at Cornwall.”

Roy battled hard to finish in the second position.

“I came here to win,” Roy said before learning of the disqualification. “I tried everything in the final moments. I can’t thank my team enough for all the hard work put in on the car today. We will be back tomorrow night to aim for the win.”

Rob Yetman was also satisfied with his podium result as the third-place finisher.

“I thought I could finish in second tonight but the 48 of Roy surprised me. All in all, it is good for the Series points,” Yetman said. “We already have something planned for tomorrow night (at Cornwall).”

Pascal Payeur and Jeffrey Lapalme were on the front row of the 50-lap event as Payeur took the lead over the field of 22 Pro Stock machines with Yves Hamel is second and CD Beauchamp in third. A good battle occurred between the three drivers for the lead as they parted ways with the rest of the field with 10 laps in the books.

Beauchamp was strong on the inside and challenged Payeur for the lead before both collided a bit on lap 13 without any damage as Payeur held the lead. The first caution came out on lap 19 as Francois Adam slowed on the backstretch.

On the restart, Beauchamp took the top spot as he got a great jump with Payeur and Hamel in the top 3 as Dan Older and Rob Yetman completed the podium. Yetman had a strong run on the top and was quickly moving up to second spot as the flagman showed the halfway signal to the field.

As Beauchamp kept his distance from Yetman for the lead, Roy made his way to fourth as the event reached the 30-lap mark. Roy then moved up to third as Payeur faded to fourth with less than 20 laps to go.

Roy had the fastest car on the speedway at that moment and passed Yetman for second on lap 36. Both drivers were side by side for a few laps as Roy was able to pull away from the current series high point man, Yetman.

Roy gained some ground on Beauchamp with less than 10 laps to go and was on his back bumper, but could not complete the pass before the checkered flag.

The DIRTcar Pro Stock tour will end a busy weekend as the drivers will travel to Cornwall Motor Speedway tomorrow evening for the sixth round of the Series. Race time for the 50-lap event is 6:00pm.

A good field of 22 cars signed-in for the fifth round of the tour. Ten of the top 11 drivers in the DIRTcar Pro Stock series championship were in the pits. Local standout Stephane Lemire had the quickest time in the time trial session with a lap of 20.282 seconds.