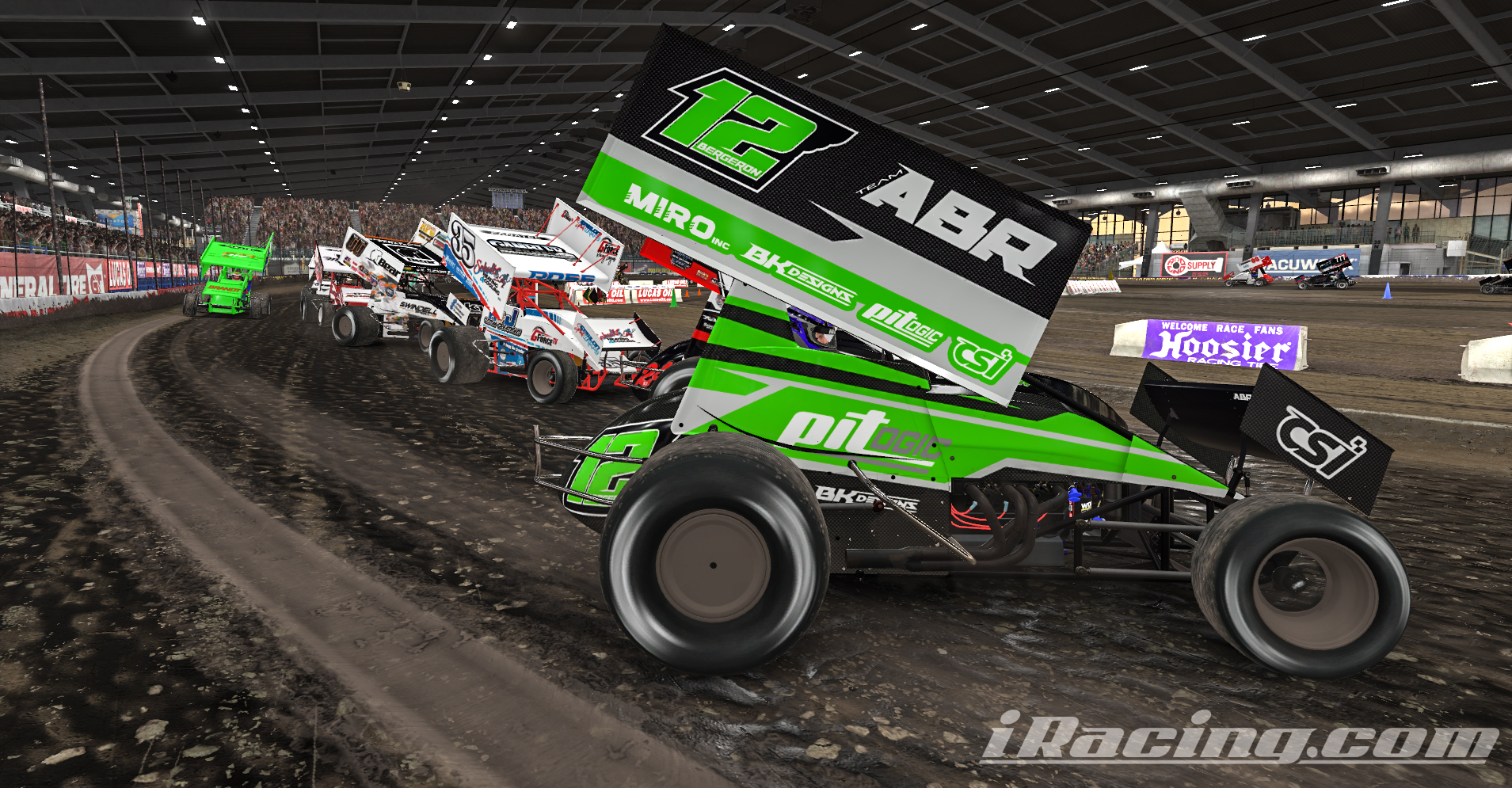 For the winningest driver on the DIRTcar eSports Tour from Season 1, it hasn’t been an easy road back to Victory Lane. But six races into Season 2, and Alex Bergeron has finally gotten the monkey off his back with a win in the 305 Sprint Car division presented by NOS Energy Drink Wednesday night at the Tulsa Expo Center’s Chili Bowl track.

In short, it was “fighter jets in a gymnasium.” Lapped cars were everywhere. The entire top-five stacked on top of each other at one point battling for the lead. Nothing but 30 laps of near-chaos as these full-size winged Sprint Cars zipped around this virtual quarter-mile bullring, primarily intended for iRacing and real-life Midget competition.

And when all was said and done, Bergeron, of Drummondville, QC, was the one man that stood above the rest, taking the lead from polesitter Hayden Cardwell in a fury of slower traffic and leading the rest of the way for his fourth career DIRTcar eSports Tour victory.

“It got a bit tricky there with the lapped cars, but we knew going into this race that it was going to happen,” Bergeron told announcer Chase Raudman in the DIRTVision post-race interview. “This track is so small and it’s bizarre to see these kinds of cars on this track, but it was fun to race and the competition [level] was high. We’re glad to be on top here tonight.”

Cardwell, of Knoxville, TN, had been leading from the drop of the green when, in digging though the rear of the 20-car field, he and the rest of the top-five cars all came up on a large group of slower traffic as they completed Lap 15. Colt Currie and Jesse Enterkin were battling for position when they made contact right in front of the leaders, forcing Cardwell to take evasive action out of his low groove, which left the door open for Bergeron to slip by underneath.

“I just made a couple mistakes in lapped traffic, and if you leave a hole open here, someone’s gonna push through. That’s what Alex did, and he capitalized,” Cardwell said of the pass for the lead.

However, Cardwell lost more than just the lead in the exchange. With the extremely limited racing room on the track, the two wheel-banged a couple times down the front-stretch, sending Cardwell into a pinball-like bounce off of each of the other top-five cars on his way backwards. When it was all over, Cardwell had gone from the lead to fifth in half a lap.

With a never-say-die attitude, Cardwell immediately got back on his horse and took it to the top-side, regaining three of his lost spots before the final caution flag was displayed with three-to-go.

“I feel like this one kinda got away from us,” Cardwell said. “We wanted to be the first ones to go back-to-back on this tour, but some things just aren’t meant to happen.”

Now with a clear track in front of him, it was all Team ABR #12. Bergeron cruised to the checkers for the $250 victory.

While Cardwell was able to hang on for second, just one week after getting a win with the UMP Modifieds at Fairbury, current Tour points leader Kendal Tucker crossed in third for his sixth-consecutive podium finish. He had one shot at Bergeron before the final yellow was thrown, but more lapped traffic got in his lane and slowed him down, allowing Bergeron to pull away on the top side.

All-in-all, Tucker, of Mt. Airy, NC, has been nothing short of spectacular in Season 2, earning almost $1,000 total in prize money since the start of the Tour one month ago. All he’ll need to do is maintain his consistency over the final two races to secure the points championship.

“It feels pretty good to keep running as consistent as we have been. That’s the sixth top-five and we haven’t finished outside of the top-three, actually, so it’s pretty cool to be that consistent with all these races and all these different types of cars,” Tucker said.

The DIRTcar eSports Tour action continues next Wednesday night, Jan. 13, with Round #7 – Pro Late Models presented by Hoosier Racing Tire at Eldora Speedway. Sign up today at DIRTcar.com/eSports or watch all the action live on DIRTVision!