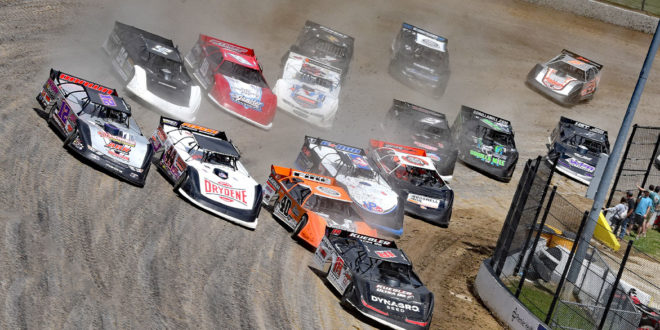 The weekend kicks off with the completion of the Dirt Late Model Dream on Wednesday, Sep. 7

A September tradition continues at Eldora Speedway this weekend, as the DIRTcar Late Models return for 52nd World 100 Sept. 7-10.

Four nights of action are set at the “House that Earl Built,” starting with the epic conclusion of the Dirt Late Model Dream on Wednesday, Sept. 7, worth $128,000.

Drivers who haven’t won a Feature at Eldora will also have a chance to compete on Wednesday, as part of a program called “Chasing the Dream.”

Points will be accumulated on both nights, setting the lineups for Eldora’s iconic six Heat Races on Saturday, Sept. 10, and the battle for $55,000 in the 52nd World 100.

Here are some of the storylines to follow this weekend:

DREAM WARRIORS: The first order of business on World 100 weekend at Eldora is finishing the final 86 laps of this year’s Dirt Late Model Dream.

Chris Madden will lead the field back to green on Wednesday night, searching for his first Eldora crown jewel victory. The Gray Court, SC driver, led the first 14 laps of the event in June and has momentum at the track after a second-place finish in the Eldora Million.

A couple of drivers who are also searching for their first Eldora crown jewel triumph are Hudson O’Neal and Carson Ferguson, who will restart in row two.

Eldora Million winner Jonathan Davenport will restart in 20th when the race resumes on Wednesday.

SUPERMAN’S WORLD: Davenport has won more money than any other driver in 2022, adding several crown jewel victories along with his Eldora Million win.

He enters the weekend as the favorite to score his fifth World 100 victory and seventh Eldora crown jewel win.

The Blairsville, GA driver has won four of the last seven World 100s and hasn’t finished outside the top five in the previous three events.

If “Superman” scores his fifth triumph this weekend, he’ll trail only Billy Moyer in World 100 wins, who has six.

LAST SHOT AT ELDORA: Last week, Brandon Sheppard announced he would leave Rocket1 Racing at the end of this season. That means this year’s World 100 is the last chance for Sheppard to win an Eldora Crown Jewel with car owner Mark Richards.

The two scored a Dirt Late Model Dream win together in 2019 and hope to capture that magic again this weekend between the Dream and the World.

Sheppard’s best finish in the World 100 is a sixth in the 50th running of the event.

Despite that heartbreak, he still showed his consistency finishing fourth.

The Watertown, NY driver will restart fifth in the Dirt Late Model Dream and knows the winning formula at Eldora in September, winning the World 100 in 2018.

A win this weekend would be “T-Mac’s” second crown jewel victory at the track.

END OF THE CURSE: Devin Moran has won at many tracks across his home state of Ohio, but one that’s eluded him and his family since 2001 is Eldora.

Since his dad Donnie won the first Eldora Million, a Moran hasn’t reached Victory Lane at “The Big E.”

Moran, from Dresden, OH, hopes to change that this weekend, building off the momentum from his third-place finish in June’s Eldora Million.

“The Mailman’s” best World 100 finish is sixth in the 51st running of the event.

THE BALLAD OF BOBBY PIERCE: A stat Bobby Pierce carries with him into every racetrack is that he’s the youngest crown jewel winning in Eldora History.

The “Smooth Operator” won the World 100 in 2016 but hasn’t finished better than 14th in the event since.

However, the Oakwood, IL driver comes into the weekend with momentum after scoring a win at Fairbury last weekend and three straight second-place finishes at Davenport Speedway last month.

Pierce will also continue his trend of special paint schemes for the event, as he’ll run another Ricky Bobby-inspired paint job this weekend.