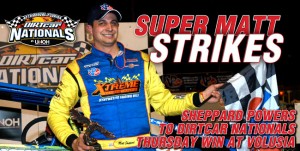 BARBERVILLE, Fla. – Feb. 17, 2011 – On a night that begged for horsepower and patience, often at the same time, Matt Sheppard made all the right moves Thursday in the Super DIRTcar Series Big-Block Modified feature event at the 40th DIRTcar Nationals by University of Northwestern Ohio at Volusia Speedway Park.

Rolling off from the inside of Row 3, Sheppard picked his way through heavy traffic early in the 30-lap race, finding a groove on the bottom side of the half-mile oval that worked for his Xtreme Lubricants Bicknell machine. He let leaders Dave Rauscher and Willy Decker battle while he tried to fend off Tim Fuller. Sheppard and Fuller kept pace with each other, Sheppard on the bottom, Fuller on the high side. With 10 laps down, Fuller found his way to the lead while Sheppard tried to race past Friesen, who won the Big-Block Modified opener on Wednesday night at Volusia.

Sheppard, of Waterloo, N.Y., kept the pressure on, slipping past Friesen with 12 laps complete and setting his sights on Fuller. Those two then raced side-by-side before they caught the back of the field. At the halfway point, the two tried to lap a car. Fuller went to the top, Sheppard to the bottom, splitting the car. The move wound up knocking Fuller from the race after contact to the front end of his Smith Brothers Concrete Foundations Teo forced him to the pits. Sheppard would never trail again.

“It was tough,” said Sheppard, the defending DIRTcar Nationals by UNOH champion. “The track was real fast. It’s tough on the cars. You really had to drive hard and manhandle them tonight. I got the right break in traffic. I picked the right lane and was able to get by Tim (Fuller) and hold on for the rest of the race.

“It was pretty wild out there. We had a lapped car running in the middle. He chose the top and I chose the bottom. It ended up working out in my favor.”

On the ensuing double-file restart, Sheppard chose the outside lane with Decker to his inside. Sheppard made the top groove work as they charged into the first corner. Andy Bachetti had a great restart as he surged into second, seemingly poised to attack Sheppard, but a caution with 21 laps complete and another one lap later helped Decker and Friesen reclaim the podium positions. In all, there were five cautions during the race.

“I think I needed a little luck,” said Decker, of Vernon, N.Y. “We weren’t getting through the holes as good as the other guys were. We had a good car. I think if we could have got through them we would have had something for them.”

Rauscher, Bachetti and Sheppard won their heats with Rick Laubach capturing the B-main.

On Friday and Saturday nights, the DIRTcar Late Models, World of Outlaws Late Models and Super DIRTcar Series Big-Block Modifieds compete at Volusia. Gates open at 5 p.m., hot laps are at 6 p.m. and racing is at 7:30 p.m.