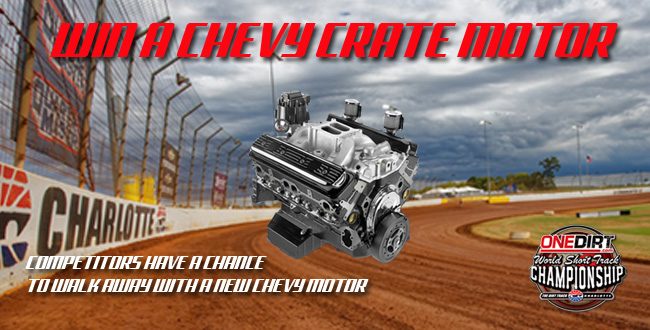 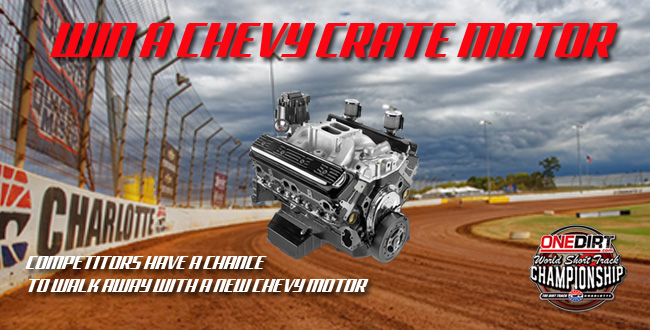 CONCORD, NC — August 24, 2017 — One lucky competitor at the OneDirt World Short Track Championship at the Dirt Track at Charlotte Motor Speedway from October 26 – 28, 2017 will walk away a winner of a brand-new Chevrolet Performance crate motor.

By registering for competition for the second annual OneDirt World Short Track Championship, each competitor will be entered into a raffle for a brand-new Chevrolet Performance crate motor. However, drivers who complete their advanced registration prior to the event will receive a SECOND entry into the drawing, doubling their chances to win — so register today!

“Chevrolet Performance is honored to be an integral part of the growth of the OneDirt World Short Track Championship for the second year in a row,” said Bill Martens, Special Programs Manager, Chevrolet Performance. “We fuel the passion of automotive enthusiasts all over the world, so to be a piece of the heartbeat that brings racing at its roots to one of racing’s biggest stages, the Dirt Track at Charlotte Motor Speedway, helps us directly connect to the people who are constantly pushing our product to the next level. We are excited to take that relationship a step further by giving one of our Chevrolet Performance crate motors to one lucky competitor for the second year.”

The 2017 OneDirt World Short Track Championship will once again be broadcast on DIRTVision.com with live streaming pay-per-view, increasing the exposure for some of dirt track racing’s most exciting divisions.