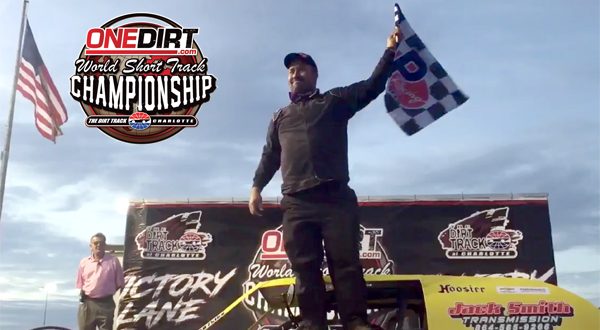 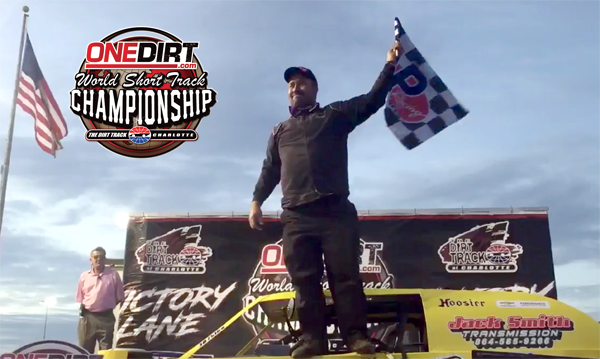 CONCORD, NC — Oct. 28, 2017 — The final day of the OneDirt World Short Track Championship started for the DRIVEN Racing Oil Crate Sportsman with an eight-lap Last Chance Showdown in which a field of 15 cars battled for the final six positions in the 20-lap Feature later Saturday evening.

After running into issues in his heat race on Friday Night, Damon Crump was looking to go forward. Much like his heat race however, Crump ran into big trouble in Turn 2 when his No. 18 made contact with an inside tire. The fastest car in the division would not make the Feature event.

It was Ricky Greene in the No. 18g who grabbed the checkered flag and transferred his way into the DRIVEN Racing Oil Feature event, placing him 19th on the starting grid.

The new scheme on the Duvall Flintstone F1yer was a tribute to his late father, Mike Duvall, (a very successful dirt racer) who passed away just over a month ago.

“I know my Daddy was with us tonight,” said an emotional Mitchell Duvall in Victory Lane. “I can’t believe we won it for him. We had his paint scheme. I can’t describe how good it feels. Daddy taught me everything I know and I love him, and I hope he’s up there watching.”

Early in the 20-lap Feature it was looking like Ben Watkins would take the win in the No. 71, but second-place Marty Reid made a run on Watkins in Turn 4 and the two hooked bumpers and went into a spin cycle. Reid was able to continue on and inherited the lead. With Reid now out front, Britt Dover started to make a charge towards him.

As the lights flipped on to illuminate the 4/10th-mile oval, Duval, who started in the fourth spot, made his bid for the lead.

The field was bunched back up with two laps to go, and Dover made one last effort for the lead as the field headed into Turn 1. Duvall was able to fend off Dover and checked out and picked up the win for the second year in a row in the DRIVEN Racing Oil Crate Sportsman.

Ricky Greene, who transferred in from the Last Chance Showdown, picked up 17 positions to take home the Fox Shox Hard Charger award and an extra $150 paycheck. Dover rounded out the top-three finishing positions.

Kade Langley, of Rock Hill, SC, won the Sportsman of the Year Award in the Crate Sportsman division.