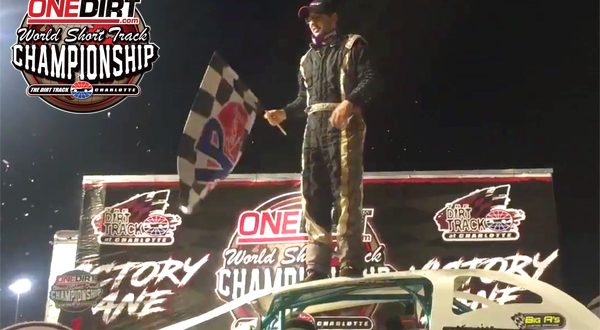 Austin claimed the inaugural OneDirt World Short Track Championship Feature last year in front of Justin, but the roles were reversed for the second episode. Justin did everything in his power to hold off multiple charges from his younger brother to secure the $2,500 payday and a new RACEQUIP helmet.

“This race means a lot more to me this year having him finish behind me. He has held last year’s race over my head for the past year, all week, today, and every other time we race. He always brings up Charlotte,” laughed Justin. “Now he is going to hear it until next time. We race out of the same shop, but we rub like we don’t even know each other. We both try to win, so racing against him makes me better for sure.”

While the first and second positions on the track were controlled mainly by the Mintz brothers, multiple drivers fought for the final podium position, including Travis Mosley, Nick Walker, Tack Brown, and Jammie Mattison, who often went three-wide on the hunt for third. It was ultimately Walker in third once the checkers fell.

Cody Ussery was awarded the COMP Cams Monster Mini Hard Charger award and one pair of Fox Racing Shox after finishing eighth from an 18th position start. And Greg Brew won the division Sportsman of the Year Award earlier in the day.