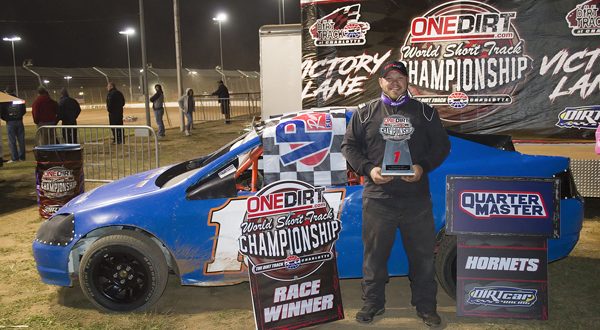 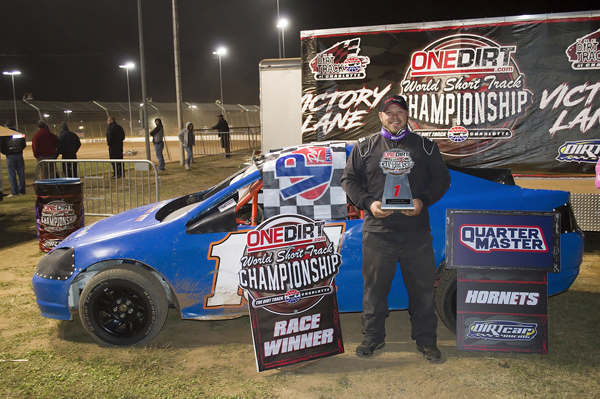 In the first QuarterMaster Hornets 15-lap Feature the No. 62 of Andrew Smith jumped out to an early lead. As the Georgia native started to open up the gap between him and second, the No. 62 expired as the field headed into Turn 1. Still under green, a three-wide battle for the lead ensued between the No. 28 of Jay Johnson, the No. 21x of Shannon Barnhill, and the No. 151 of Eric Boozel.

As the leaders were coming to complete lap seven, the No. 2 of Zebediaz Cox blew up directly in front of them, bringing out the first and only yellow flag of the Feature.

“I said the same thing last year; this is a really big stage,” said Boozel. “This is an amazing opportunity to come to Charlotte and race. It’s everything. We needed a little bit of luck, but to take home a victory is awesome!”

In the final Feature of the evening, the No. 11 of Casey Shane jumped out to the lead over the No. 15 of Chris Anderson. The field was slowed on lap 2 after two cars came into contact on the front stretch.

On the restart the No. 11 and the No. 15 checked back out on the field. A close call came on lap 8 when the two leaders had to split lap traffic as they headed down the backstretch. It was on lap 11 when the No. 69 lost a right-rear wheel, bringing out the red flag. While under red flag conditions, leader Casey Shane had a fire under the hood, ending his chance at winning. Shane was able to exit the car safely.

On the final restart, the No. 15 of Anderson held off a hard charging No. 777 of Justin Dalton in the final four-lap shootout.

“I don’t even know what to say,” said an elated Anderson. “I got to thank my wife — she does everything to the car — and Eric [Boozel] for talking me into come down [to Charlotte]. I am definitely happy!”