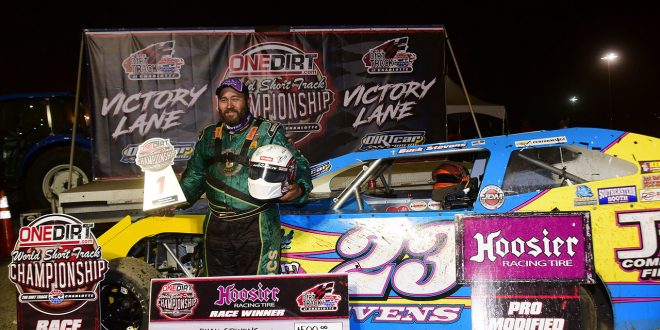 CONCORD, N.C. — Oct. 22, 2016 — The first-ever OneDirt World Short Track Championship came to a close on Saturday night with the “crowning” of nine division champions, but the big win went to all of the 325 weekly drivers as the dirt racing family reunion brought them all to center stage, resulting in a father/son duo in Victory Lane in the Pro Modified division, a two-brother duo in Victory Lane in the Monster Mini-Stock class, and a father/son baton passing on the Pro Sprint side.

“I’ve been coming here since ’07, and I’m bringing my young’un here now and trying to get him going, so we’re having fun at it,” said Pro Modified driver Buck Stevens referring to his son Greyson. “He’s 15 years old and has been racing Modifieds since he was 13. He knows what he can do and can’t do, and he’s still learning. He’s very consistent, and he’s really smooth out there — a lot smoother than I am. I never claim to be a race car driver; I just do it for fun.”

GO TO ONEDIRT.COM FOR THE CHAMPIONSHIP COVERAGE

The World Short Track Championship will be back next year, around the same time.

“It means a lot,” said Pro Late Model driver Donald Bradsher. “It gives a lot of grassroots racers an opportunity to come here and run at Charlotte. Most guys never get to come here. They just dream about it. But I think, all in all, it was a great success. To have more than 300 cars here for the first year, it went really well. The weather has been great. I’d love to see it come back next year. You know, I think they hit the nail on the head here this weekend.”