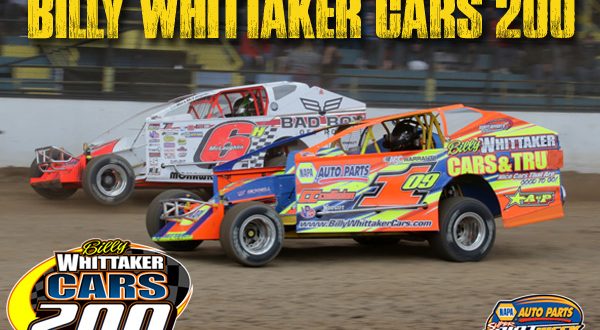 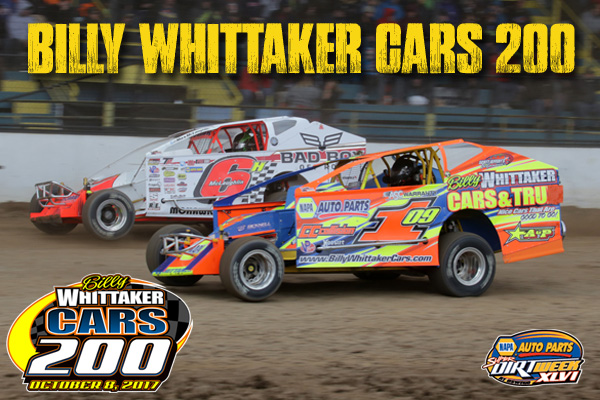 “Billy Whittaker Cars and Trux is honored to be the title sponsor of the Big-Block Modified event at Super DIRT Week,” said owner Billy Whittaker. “With this event being centered in Central New York but having a National reach, it was a no-brainer for our business to get involved with an event of this magnitude. We look forward to making a great event even more memorable.”

Whittaker, a long-time Big-Block Modified competitor, has had a storied career. Just recently, Whittaker picked up a win earlier this season after leading all 20 laps of the special All Star Invitational race at Eldora Speedway.

“We are pleased to have Billy Whittaker Cars and Trux come on board as the title sponsor of Sunday’s big race,” said Brian Carter, Chief Executive Officer of DIRTcar Racing. “Billy has been a great competitor in the Series and even better business man. We look forward to this partnership and making it flourish.”

The Super DIRTcar Series Big-Block Modifieds will hit the 5/8th-mile oval on Wednesday for the first of several practice sessions throughout the week. The powerful Modifieds will run against the clock on Thursday afternoon to lock in the top six positions for Sunday afternoon’s Billy Whittaker Cars 200.

The Series will then take over the Clay Palace under the lights on Friday night, October 6, for the Triple-30s, locking in another 24 competitors into Sunday’s main event. On Saturday morning, all remaining Big-Block Modified drivers will compete in the Last Chance Showdown to fill out the field for the Billy Whittaker Cars 200.

When the action at Oswego Speedway comes to a close Saturday afternoon, the focus will shift over to nearby Fulton Speedway for the 25-lap “Win and You’re In”, where one lucky driver will lock themselves into the 41st and final starting spot in the granddaddy of all Big-Block Modified races.

All qualified drivers for the Billy Whittaker Cars 200 will participate in an autograph session outside of the front stretch on the fan midway at 11:45 a.m. on Sunday, just two hours before the main event.

NAPA Super DIRT Week returns to Oswego Speedway for its second year. The “Steel Palace” is a 0.625-mile asphalt-oval that will be transformed into the “Clay Palace” by nearly 600 truckloads of clay. The week will kick off with early parking for campers on Sunday, October 1. Early Bird tech inspection for all classes and competitors starts on Monday, October 2. On-track activities will begin shortly after the procession of cars through the streets of Oswego on Wednesday, October 4 at roughly 12 p.m.