“I just have to thank the guys for giving me a great hot rod tonight,” Johnson saud in Victory Lane after leading the final 80 laps of Monday’s 100-lap Super DIRTcar Big Block Modified Series feature race. “My car was really good. It’s really been working well for me. I’m really happy with it and I was able to maneuver it to the front.”

Johnson started fourth on the starting grid after finishing third in his heat race, but it was Decker who charged ahead to claim the lead at the green flag. Polesitter Billy Dunn fell to third within the first lap and Johnson sat comfortably in second.

The leaders reached lapped traffic in lap 11, but weren’t slowed. It was the first caution of the race in lap 16 that gave Johnson the opportunity to challenge the Decker for the lead..

Decker took the inside line on the lap 20 restart, but Johnson powered high on the outside to keep pace. Johnson was ahead just by a nose at the flagstand the following lap, but he found some bite the next time around and pulled ahead of Decker’s Gypsum Wholesalers No. 91.

“I got a good run on the outside on Billy (Decker) on the restart and we maintained that momentum through (turns) one and two to get the lead,” said Johnson, who claimed his fifth career Super DIRTcar Series win at Autodrome Granby Monday night.

“I missed a little bit, and Dan Johnson)got position on me,” Decker said. “We did have a pretty good race car, just I thought I was getting around the bottom pretty good, then the caution came out there and I took the bottom, and I think the topin (turns) one and two was just a little bit better.”

Dunn brought the next caution in lap 33 when the Number One Speed No. 49 slowed to a stop in turn 4. Johnson reclaimed the lead off the restart, followed by Decker in second, Gary Tomkins third, Brett Hearn fourth and Jimmy Phelps fifth. Yellow flag conditions returned to the track soon thereafter with local star Mario Clair experiencing mechanical issues. Tomkins was fast on the restart and challenged Decker for second, but Decker stayed ahead.

The third-place car of Tomkins, who was running strong and made his way from seventh to third, brought another caution in lap 53. He steered the No. 84 into the pit area and returned to the track before the field returned to green. However, Tomkins soon afterwards pit in lap 60 under green conditions and did not make it back out.

The Super DIRTcar Series heats up with another 100-lap feature Tuesday, July 22, at Autodrome Drummond in Drummondville, Quebec. Soon thereafter, the series returns to the States for the continuation of Brett Hearn’s ‘The Big Show 6’ Wednesday, July 30, at Albany-Saratoga Speedway in Malta, N.Y. 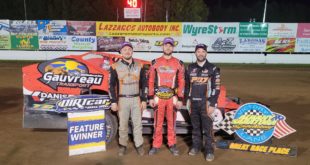