WEEDSPORT, N.Y. – May 29, 2011 – Legendary racers Jerry Cook, Irv Taylor and Doug Hoffman were honored Sunday with their inductions into the DIRT
Northeast Modified Hall of Fame as part of DIRTcar All-Star Weekend.

Jerry Cook, a six-time NASCAR Modified champion, was introduced to the gathering by long-time friend and associate Pete Hollebrand Jr. Hollebrand
covered Cook’s career and gave insight into what made Jerry Cook one of NASCAR’s Top 50 All-Time drivers. Cook accepted the award mentioning the all of
the help he received over the years from his crew and his wife of 43 years.

Cook noted how he started racing at the original Ransomville Speedway located behind the garage of Ed Ortiz. He gave credit to Cam Gagliardi, who was
also drove for him as Cook was too young to race himself.

“I owe it to Cam for starting me on this career path with NASCAR that has not only affected me but all of my family, as my children also work with
NASCAR racing teams,” he said.

Fonda Speedway legend Irv Taylor was the next driver up. Taylor was inducted by publisher and historian Lew Boyd. A tearful Taylor accepted his award
thanking all of his friends, fans and family members.

“I am speechless,” stated a stunned Taylor at the podium. “I never expected to be honored in such a way.”

Finally, Doug Hoffman, the 1991 Mr. DIRT Champion and Syracuse 200 winner, was presented for induction. Hoffman reminded everyone of all of the fun we
had over the years he competed. Today, Hoffman and his wife Gina promote and operate Mahoning Valley Speedway in Pennsylvania.

Shane Andrews served as host for the event at the DIRT Modified Hall of Fame in Weedsport, N.Y., with fellow track announcer Joe Marrotta welcoming all
of the attendees to the 20th year awards. Special thanks were made to all of the people who helped to refurbish the Hall of Fame building
following a mid-winter water pipe break that damaged much of the main wall that held the Hall of Fame portraits.

·      Audrey Payne, from Skyline Speedway and Carol Deming Haynes were named recipients of the Gater Photo News
Women in Racing Award. Andrews quipped with Payne about being the first person to hire him as an announcer … and the first one to fire him.
Haynes was not able to attend the ceremonies as she was in Indiana for the Indianapolis 500. George Caruso, from Mitchell Press Inc., accepted her
award by reading a thank you letter written by Haynes.

·      The crew chief who masterminded Stewart Friesen’s victory in the 2010 Super DIRT Week SEF 200, Ron Ste Marie, was
named as the “Mechanic of the Year” by the DIRT Motorsports Hall of Fame Induction Committee.

Many of the inductees and their families followed the ceremony by attending the DIRTcar All-Star Weekend races Sunday night at Rolling Wheels Raceway
Park, where Tim Fuller captured the Big-Block Modified Super DIRTcar Series season opener. 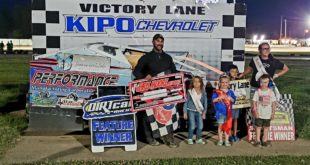