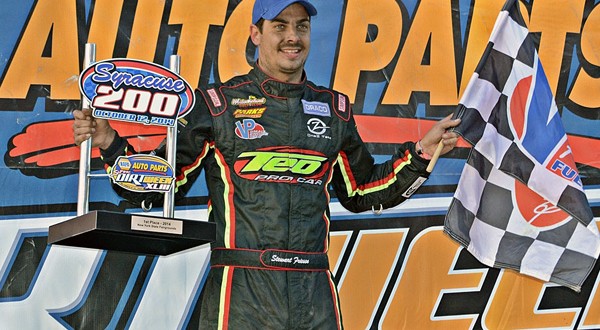 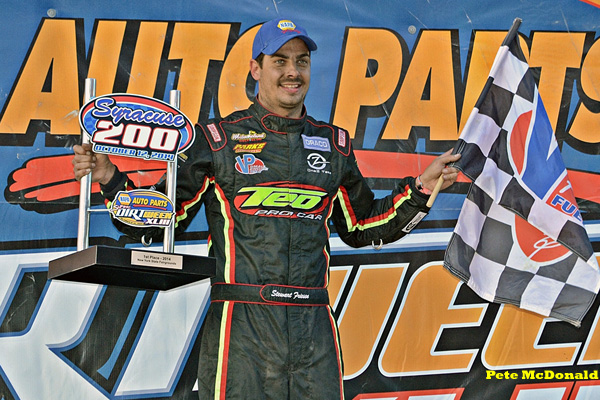 But to secure his third career victory in the division’s most prestigious race on Sunday, Friesen just put his foot to the floor and tossed his car around the historic one-mile oval like he was blasting around a quarter-mile bullring.

Rallying from multiple mid-race pit stops to repair a broken shock mount, Friesen authored a dramatic charge over the final 50 circuits that will go down in Moody Mile lore. He completed his comeback by sailing around the outside of Matt Sheppard in through turns three and four to grab the lead in breathtaking fashion.

A 31-year-old native of Niagara-on-the-Lake, Ont., who now resides in Sprakers, N.Y., Friesen pulled away from Sheppard following a lap-194 restart to secure his third $50,000 Syracuse 200 victory in the last five years by 2.154 seconds over his 32-year-old rival from Waterloo, N.Y.

The star of the day was unquestionably Friesen, who went from thinking his chances at another checkered flag were done when problems with his left-rear shock and fuel vent developed during the event’s first half to putting together one of the most memorable drives in the 43-year history of NAPA Super DIRT Week.

“I was in the dumps for about a hundred laps of that deal,” said Friesen, who hustled Jeff Daley’s Teo-Pro car from the 21st starting spot to second place before discovering the left-rear suspension problem during his lap-72 pit stop. “The shock was something that we could kind of deal with, but then when we came in for our (planned) last stop (on lap 101) we had a problem with the fuel vent. (Crew chief) Matty (Hearn) said (on the radio), ‘You gotta come back in because we didn’t get any fuel in the car whatsoever,’ and I got real bummed out.”

But Friesen’s crew didn’t give up. After a final stop on lap 119, not only was his No. 44 machine’s suspension patched up and his fuel situation handled enough to get some gas in the car, it also became faster.

“When we came in and swapped (the shock mount) we made some turns and adjustments to keep up with the changing track and we went with the 400-compound (softer Hoosier) tires on that last stop just trying something,” said Friesen. “I think that’s what ultimately allowed us to win this race. Everything just came together and clicked perfectly (after that).”

When Friesen found himself back in the top 15 after a flurry of three caution flags between laps 147 and 158, he decided to let it all hang out. Aware that the leader at the lap-158 restart, Tim McCreadie of Watertown, N.Y., and second-place driver, Australian Peter Britten, were in fuel-conservation mode after pitting on lap 74, he forced the issue in hopes of getting up to them.

Casting aside the normal conservative Syracuse approach, Friesen put on a high-side assault through turns one and two that carried him to fifth place by lap 168. But his charge awakened Sheppard, who moved to the top through the corners as well and vaulted past Heffner and Britten to reach second on lap 172.

When McCreadie’s bid for a first-ever Syracuse victory ended on lap 179 due to a broken left-rear wheel, Sheppard inherited the lead for a restart that came on that same circuit because under event rules only green-flag laps counted from the 175th lap to the finish. Friesen proceeded to dispose of Britten when the green flag returned and the battle between DIRTcar Big-Block Modified racings two young superstars was on.

Friesen’s moment of truth came while working the 189th circuit. He drove around the outside of Sheppard’s HBR Troyer car so fast through turns three and four to surge ahead as lap 190 was scored that he couldn’t help but be amazed.

“(Kevin) Bates (a Pennsylvania Modified driver) was in turn three spotting for me and I was asking him, ‘Is anybody making it on the top?'” said Friesen. “He was like, ‘No, no, no.’ You don’t get too much out of Bates, so when he says no, it’s a definite no.

“Well, we got a run on Matt just before that, and I knew I had like 10 cars (lengths) behind me, so I was like, ‘Well, if we try (the outside in three and four) and slip out (of the groove), I can get back to him in one and two.’

“It ended up that (Sheppard) just backed it down to really protect bottom that lap and we were able to sweep around him, get on the brakes and get it back down before we really lost it. I kind of surprised myself with how fast we went by him.”

Sheppard admitted that he was effectively a sitting duck for the freight train that Friesen had become.

“We pretty much did everything right today but just didn’t turn it into a win,” said Sheppard, who captured the race in 2009. “It wasn’t as much of a track position game as normal. The track really widened out, but we just had a little bit older tires and we kind of detuned the motor a little bit for fuel mileage and that just wasn’t quite the right strategy for us to hold (Friesen) off.”

Friesen simply was unbeatable once he got his Cici-powered car honking around the sun-banked mile. He enjoyed every minute of his ride.

“It’s so much fun (to race like that),” said Friesen, who has now won the Syracuse 200 three times in just eight career starts. “The fuel mileage game was so stressful … you’re just trying to roll out (of the throttle) early and save and conserve and not beat up the tires and the car. It’s so much fun to take a car with almost 900 horsepower and a lot of grip and just go on a mile track and run the balls off it.”

“It’s awesome. It’s what the cars are made to do — and the track crew gives us a track now where you can do it, where you don’t have to just rely on strategy and fuel mileage. You can get out there and race, and I think that’s awesome that this event is going that way.

“I’ve said this before, but this place drives almost like four short tracks,” he continued. “There’s turn one and turn two, and there’s turn three and turn four, and if you kind of treat it like that and go as fast as you can in those sections, you start making up ground.”

After pulling off an almost unthinkable victory, Friesen, who has been attending NAPA Super DIRT Week activities since he was kid, put himself in the rarified air of Big-Block Modified racing’s alltime greats. He equaled Alan Johnson’s three career Syracuse 200 wins and trails only Brett Hearn of Sussex, N.J. (six wins), Billy Decker of Unadilla, N.Y. (four) and Floridian Gary Balough (four) on the alltime victory list.

“To be amongst that group is something very special and something I’m very, very proud of,” said Friesen, who late grandfather, Stan, and late uncle, Alex, were also past Syracuse 200 starters. “It’s something I don’t take for granted whatsoever.”

Finishing in positions 6-10 were Ryan Godown of Ringoes, N.J., who lost a lap when he slowed to bring out a caution flag on lap 99 and pitted but soon regained it thanks to the ‘Lucky Dog’ rule; Kenny Tremont of West Sand Lake, N.Y., who briefly led laps 117-118 before making a necessary pit stop; Billy Decker of Unadilla, N.Y., who was knocked from serious contention by unscheduled pit stops; Justin Haers of Phelps, N.Y.; and Eddie Marshall of Ridgefield, Conn., who recovered from an early tire problem that briefly pit him down a lap.

Hearn, who won Saturday’s ‘Salute to the Troops’ 358-Modified 150, had an up-and-down day. After controlling the race’s first quarter he had to make a series of five pit stop to repair a broken right-rear shock mount — and then, just as he broke back into the top five following a lap-194 restart, his car’s fuel tank ran dry three laps from the finish.

Another contender who fell by the wayside was Jimmy Phelps of Baldwinsville, N.Y., who appeared to be in position to win the 200 after being the first car out of the pits on lap 101. He was cruising in third place on lap 155 when a broken left-rear hub forced him to retire.

The race was slowed by 14 caution flags for 44 laps as well as three red flags, stretching its duration to over three hours.

The first red flag incident occurred on lap 39 when Ryan Susice of Ransomville, N.Y., slammed the turn-one wall. He climbed out of his car and walked to a waiting ambulance for a ride back to the pit area.

Shortly thereafter, on a lap-44 restart, two-time Syracuse 200 winner Jimmy Horton of Neshanic Station, N.J., hit the turn-one wall hard, forcing officials to stop the race one circuit later. He walked to the ambulance with assistance and later visited a local hospital for tests on a possible concussion.

The final red flag came on a lap-74 restart when a turn-two scramble sent Vinnie Vitale of Cato, N.Y., onto his roof. He wasn’t injured.

Sunday’s Syracuse 200 was taped for broadcast on the CBS Sports Network. An expected December broadcast date will be announced in the near future.

For the latest news and updates about NAPA Auto Parts Super DIRT Week and DIRTcar Racing, visit www.SuperDirtWeekOnline.com and www.DirtCar.com.