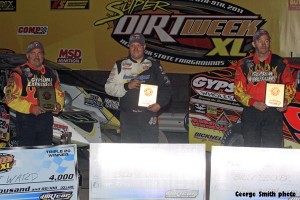 The three Big-Block events closed out a historic racing card at the Syracuse Mile, which for the first time in the history of Super DIRT Week played host to an evening heat-race program. Three portable Musco light towers were positioned in the infield of the massive oval to illuminate the speedway at a level never before seen by fans and competitors.

Decker, 46, kicked off the Triple 20s with a dominating performance. Returning to the track one day after setting fast time in Thursday’s qualifying session to earn the pole position for Sunday’s SEF 200, the veteran driver led from start-to-finish add a $4,000 heat triumph to his ever-growing Super DIRT Week ledger.

“We got a pretty good package,” Decker said of his Gypsum Wholesalers Bicknell/Kevlar combination. “I feel honored, lucky and fortunate. Hopefully we can carry it over to Sunday’s race now.”

Justin Haers of Phelps, N.Y., chased Decker throughout the distance but settled for second, 1.607 seconds behind at the finish. Jimmy Phelps of Baldwinsville, N.Y., placed third, followed by Jimmy Horton of Neshanic Station, N.J., and J.R. Heffner of Pittsfield, Mass.

The 27-year-old Dunn was the evening’s pleasant surprise. He scored his first-ever Super DIRT Week heat-race win after leading the entire distance of the second 20-lapper.

“This is a little more than I expected so far, but I knew we had it in us,” said Dunn, a Super DIRTcar Series regular who turned heads on Thursday by registering the second-fastest lap in time trials to secure the outside-pole starting spot for Sunday’s SEF 200. “This (Bicknell) car was good to start the race last year; I passed a bunch of cars but had some mechanical trouble. We set it up exactly the same and it’s been good all week.

“Now we’ll see what we can do in the big race. It’s a long race, but we’ve been good all week so we’re confident.”

Ward, 54, controlled the evening’s finale, becoming the third driver to parlay a pole position start into a $4,000 triumph. He beat Matt Sheppard of Waterloo, N.Y., to the checkered flag by 1.896 seconds.

“The car handled good and the motor’s strong – it was pretty clear sailing,” said Ward, who recorded his second career Big-Block heat-race win during Super DIRT Week. “We were real good last year (in the SEF 200) and I ran it out of gas, and now it’s driving good again. We just got to figure out strategy now for Sunday.”

Several contenders ran into trouble during the Triple 20s – none worse than Tim McCreadie of Watertown, N.Y., who started second in the first heat but didn’t complete a lap. A malfunction in the right-front corner of his Sweeteners Plus car sent him careering straight into the turn-one wall moments after the green flag.

McCreadie escaped the accident uninjured, but his car was heavily damaged. He does not have a backup, however, so his team was planning to return to their shop to repair the crashed machine for Sunday’s SEF 200, which McCreadie is scheduled to start from the fourth spot.

Hearn and Andy Bachetti of Great Barrington, Mass., finished their heats with smoke blowing from their cars, but both managed to transfer to the SEF 200. Hearn finished seventh in the first heat and Bachetti limped to a 10th-place finish in the second 20-lapper.

Former SEF 200 winners Tim Fuller of Watertown, N.Y., Kenny Tremont of West Sand Lake, N.Y., and Danny Johnson of Rochester, N.Y., failed to transfer into the event through a heat race. Both Fuller and Tremont lost power and retired from the third heat, while Johnson finished one lap down in the first prelim and missed the cut by two spots.

NASCAR Modified star Ted Christopher of Plainville, Mass., who is making his first-ever appearance at the Syracuse Mile and just his second career start in a dirt Modified, completed just one lap of the third heat before slamming the wall off turn two.

The top-10 finishers in each heat race who hadn’t locked themselves into the SEF 200 through Thursday’s time trials moved on to the $50,000-to-win headliner.

A Non-Qualifiers’ Race offering at least four more berths in the SEF 200 will be run on Sunday.