“That’s not a lot of tire there,” Hearn said in Victory Lane after Sunday’s race, pointing to the nearly bald tires on the Madsen Overhead Doors No. 20 and admitting that a couple more green laps could have taken him to the pits. “I came really close, I really did.”

Sunday’s 200-lap Super DIRTcar Big-Block Modified feature race included one mandatory pit stop after the completion of lap 20, which Hearn took, along with many other competitors, under caution in lap 62. Competitors were not allowed to use their mandatory pit stop for a tire change, so Hearn refueled and cruised back onto the track in his first and only stop of the race.

Stewart Friesen and Tim Hindley battled Hearn much of the race, keeping up with the pole-sitter off the initial green flag, and coming in behind the defending Eastern States 200 Champion at the checkered flag. Hindley took a right-rear tire change immediately after he took his mandatory pit stop in lap 62 and Friesen’s crew changed both rear tires in lap 102, but the fresh rubber was still no match for Hearn.

Hearn started the weekend strong, fast-timing in Friday’s time trials with a 20.313-second lap to start on the pole Sunday. Friesen joined him at the front row with the second-fastest time, and Hindley joined Billy VanInwegen in the second row with the third fastest time.

At the green flag Sunday, Hearn sped to an initial lead, followed by Friesen in second and Hindley in third. They didn’t make it two far before Brian Gleason flipped in turn one after the completion of the first lap, bringing out the red flag.

The double-file restart gave Orange County Fair Speedway track point champion Hindley the opportunity to take on Friesen, and he sped past the No. 66. He wasn’t able to reach Hearn, who stayed ahead of the pack.

In lap 6, the yellow lights were out for Tim Fuller, who slowed in the backstretch and headed to pit road. Again Hearn was fast on the restart, establishing a 10-car-length lead by lap 8.

Two more cautions slowed the pace before lap 20, with Chris Shultz spinning in lap 11 and Pat Ward slowing to a stop in lap 17. Both times, the No. 93x of Chris Shultz took the opportunity to visit his pit stall.

Hearn lead off the lap 22 restart, with Friesen reclaiming second from Hindley. Justin Haers followed in fourth and McCreadie in fifth. Further back in the field, Larry Wight was making his way forward, challenging Andy Bachetti for sixth in lap 26, having made his way to seventh from his 17th starting spot.

In lap 31, the leader Hearn was approaching Rich Scagliotta at the rear of the field when Scagliotta spun in turn 2. Jerry Higbie was already feeling the pressure of tire wear on “The Hard Clay,” and pulled into pit road under caution to change the right rear. Another caution in lap 42 brought opportunity for several more cars, including Billy Decker and Ric Hill, to pull in for a tire change.

A multi-car pile-up off a restart in lap 48 brought the race’s second red flag, with Haers tangled up with Kolka. Gary Tomkins, Matt Sheppard, Bobby Varin, McCreadie, Billy Dunn and Dale Planck were also involved in the incident. Planck, Tomkins and Sheppard pulled into pit road for tire changes and Bachettie refueled. Haers and Kolka did not return to the track after the collision.

Hearn led off the lap 53 restart over Friesen and Hindley. Sheppard’s No. 9s wouldn’t be the same after the lap 48 accident, and slowed to a stop in lap 58 to bring out the yellow flag. Sheppard pulled into the pit area, ready to call it a day. The track stayed under caution long enough for pit road to open for the mandatory pit stop in lap 62, allowed many competitors, including the race leaders, to pull in for fuel.

At the lap 66 restart, VanInwegen was the new race leader, followed by Gary Edwards, Clinton Mills and Bob McGannon, all choosing to hold off on their mandatory pit stops. The yellow flag waved soon after the restart for Tremont, who pulled into pit road and returned to the track soon thereafter.

VanInwegen started on the inside front row in lap 69, but Edwards had a strong restart, pulling up next to the leader on the front stretch and driving around him in turns 3 and 4 to take the lead. Edwards continued to lead in lap 73 when three-time defending Super DIRTcar Series Champion Sheppard returned to the track.

VanInwegen reclaimed the race lead before a lap-77 caution slowed the pace. Off the restart, Hearn powered head on the inside to third, making his way toward Edwards and VanInwegen. Hearn made his way around Edwards on the backstretch in lap 85. Wight slowed in the front stretch in lap 88 to bring the next caution and was unable to return to the race.

In lap 94, VanInwegen still led, followed by Hearn, Friesen and Edwards. Edwards rear-ended Friesen in lap 99, causing Friesen to spin and bringing out the yellow. When pit road opened in lap 102, Friesen ducked in to change both rear tires.

Soon after the lap-105 restart, the yellow was out again with Bachetti against the inside wall in turn 2. VanInwegen kept the lead off the restart while McCreadie battled Planck and Donnie Corellis to make his way to fifth place. Hearn kept up to the leader in second, followed closely by Danny Johnson in third.

Hindley was also making his way up after his last pit stop, passing Plank in lap 125 to claim the sixth spot and soon gaining on McCreadie in fifth. Jim Davis was running in fourth after Johnson. In lap 129, McCreadie passed Davis on the outside groove after Hindley attempted to challenge McCreadie from the inside.

Corellis drifted sideways in lap 136 to bring out the yellow flag. VanInwegen pulled to the pits for a tire change, leaving Hearn as the new race leader.

Hearn lead off the lap-141 restart, but an immediate caution brought Hearn and Johnson back to the front row in a double-file restart. Again, Hearn led over Johnson. Behind them, McCreadie found speed around the turns to take third and close in on Johnson. Friesen pulled up beside Davis to challenge for sixth.

With fewer than 50 laps to go, Hindley was fast on the inside, nudging past McCreadie for third in lap 152. A few laps later, he pulled outside Johnson in turns 1 and 2, then tried inside in 3 and 4, but had little luck until Johnson got a flat in lap 155.

Starting again on the front row next to Hearn, Hindley had 40 laps to gain an edge. Hearn charged to the lead on the lap 159 restart before a caution in lap 162 brought the field back together. Off the restart, Hearn kept his lead, but a few green laps let Hindley gain momentum, staying within a couple car lengths of the leader before the yellow flag waved again in lap 173.

Hearn stayed ahead at the next double-file restart, and frequent cautions in the last 20 laps – one each in laps 182, 193 and 198 – were not enough to slow him down. A green-white-checkered finish posed a threat to Hearn’s lead, but instead it was Hindley who fell in the last laps to challenges from Friesen.

“We were able to get up there in the green-white-checkered, and make a better day out of it,” said Friesen who, after pitting twice came back from the rear of the field for a second-place finish. “We had some problems early, we made the call to go in and get some more tires, and go back at it.”

“We were able to overcome some of our adversity,” Friesen continued.

Despite succumbing to Friesen’s last-lap challenge, Hindley was not disappointed with a third-place finish in Sunday’s Eastern States 200.

“I can’t say enough for the car, the car owner, sponsors,” Hindley said. “They gave me great stuff, I had great guys, and we put on a great weekend.”

“I needed a green flag run,” he continued.

Rounding out the top five in Sunday’s race were Jimmy Phelps in fourth and Tommy Meier in fifth.

Hearn’s win Sunday significantly boosted his Super DIRTcar Series point advantage over defending series champion Sheppard, who was never the same after the wreck in lap 48 and finished the Eastern States 200 in 22nd. With just two feature races left in the Super DIRTcar Series, the battle heats up as Big-Block Modified competitors prepare for the World of Outlaws World Finals at the Dirt Track at Charlotte in Concord, N. C. 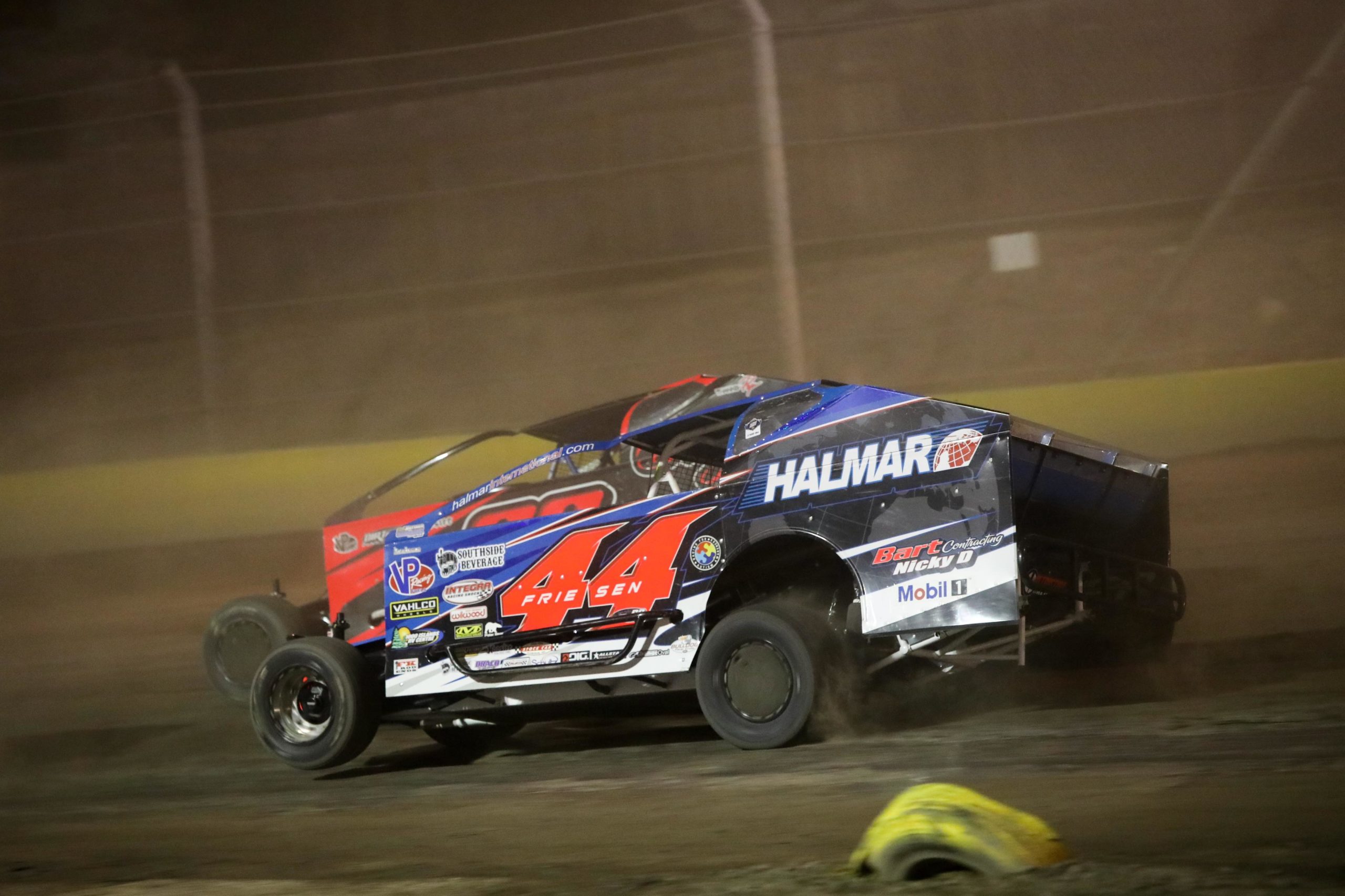