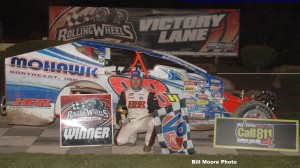 ELBRIDGE, N.Y. – July 24, 2014 – DIRTcar Correspondent Mike Mallett – The much anticipated ‘Thursday Night Thunder’ series finally got underway at the Rolling Wheels Raceway with Jimmy Phelps, of Baldwinsville, N.Y., grabbing his first win of the 2014 season in the DIRTcar Big-Block Modified 35-lap feature event.  Phelps, driving his Heinke-Baldwin Racing No. 98h Troyer car, led the entire distance for the victory.  Dave Marcuccilli dominated the 20-lap DIRTcar Sportsman feature and Daryl Ruggles took top honors in the 305 Sprint Car 20-lap A-Main.  As a result of their victories, both drivers earned an opportunity to win additional monies this Sunday, July 27, at Weedsport Speedway as part of the ‘Dig Safely Double’ Award if they can put themselves in Victory Lane once again. Marcuccilli is eligible for an extra $300 while Ruggles could earn another $200.

The DIRTcar Big-Block Modifieds saw Phelps and Jeff Brownell Jr., lead the field to the green flag with Phelps taking the early advantage.  Phelps opened up a half-straightaway on the field as Peter Britten, who started fourth, worked by Vince Vitale on the opening lap before battling with Brownell for second.  A spot he eventually took on lap four.

From there it was a two car race out in front as Phelps held the lead with Britten gaining ground each lap.  Phelps was searching various grooves as Britten worked the outside of the speedway to gain ground on the veteran Super DIRTcar Series driver.  Britten was within striking distance when the only caution of the race came out on lap 14 as Chris Hile’s car went off the top of turn two and came to a stop.

Phelps and Britten made up the front row for the green with Phelps getting the jump on the Australia native.  From here Phelps expanded the advantage over Britten.  He never wavered from the high-side of the big five-eighths mile.  He put his Hoosier Racing Tire against the cushion and opened a full-straightaway lead on Britten by lap 25.  The only difficulty for Phelps came in the closing laps as he caught the tail-end of the field.  He was forced to navigate through some traffic at the end which he did without incident en route to the win.

“Finally,” said Phelps in Victory Lane.  “Tonight there was a small group of us but it was a good group.  We had good track position and we timed good allowing us to start up front; luckily because Peter (Britten) is awfully good on this stuff.  I see he got to second so quick and I was a little nervous.  We had a great car tonight and the track was beautiful. I have to thank all the fans for hanging with us.”

Phelps was followed to the checked by fellow Troyer driver Britten, then Waterloo,N.Y., star Steve Paine in third with Pat Ward driving his LJL Racing ride to fourth and Brownell Jr., hanging on for fifth.

Danny Wiesner and Marcuccilli made up the front row for the 20-lap DIRTcar Sportsman feature on Thursday evening.  Marcuccilli got the lead as the pair raced into the first turn.  Marcuccilli went to the high-side while Wiesner tried to make it work on the bottom.  Marcuccilli moved on by and opened the advantage to two-car lengths as they raced down the backstretch.  Marcuccilli made it look easy from there as expanded the advantage over Weisner each lap.  At the checkered it was Marcuccilli scoring the win over Wiesner. James Henry finished in the third spot while Ron Davis III finished fourth after starting eighth in the caution free feature.  Matt Smith completed the top five.

In 305 Sprint Car action it looked like Danny Varin was going to easily take home top honors.  The Fonda, N.Y., native took the lead from his pole starting position and maintained a comfortable advantage in the early stages.  He had one threat come on lap 10 as Sean O’Dea lost a front tire causing him to stop in turn two.  Varin retained the edge on the restart and easily drove away from Ruggles.  Then, before lap 18 could be completed, Varin slowed drastically off of turn two and then coasted to a stop by the time he got to the frontstretch which brought out the final yellow of the race.  Ruggles got the lead from there and held on for the final two laps taking the win.  John Preston finished in the second position while Alysha Ruggles, Steve Glover and Mark Taylor completed the top five.