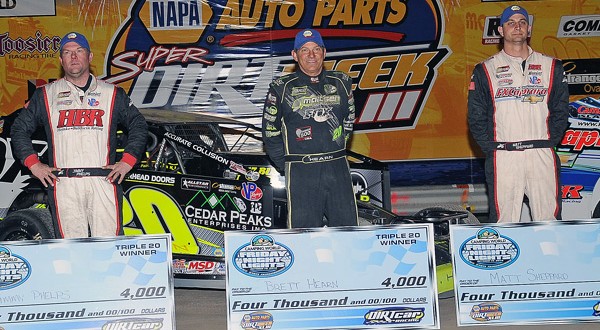 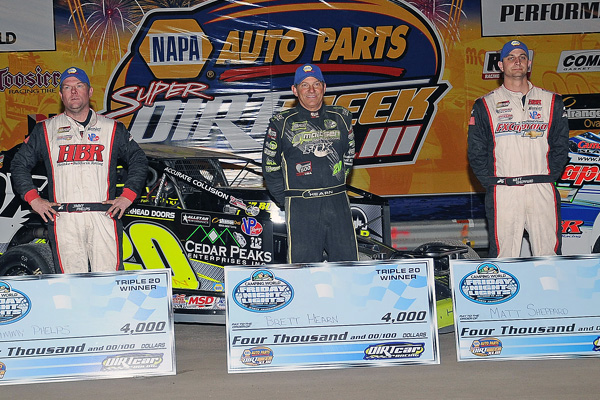 Hearn joined Heinke-Baldwin Racing teammates Sheppard and Phelps in scoring wire-to-wire $4,000 wins from the pole position. The trio will occupy the top three starting spots in Sunday’s Syracuse 200 with Hearn sandwiched by the polesitting Sheppard and Phelps in the grand finale of NAPA Auto Parts Super DIRT Week XLIII.

Sheppard, 32, soundly backed up his fast-time run in Thursday afternoon’s qualifying session with his second career Big-Block heat-race victory at the historic Syracuse Mile. His only issue was an original-start joust with outside-polesitter Billy Decker of Unadilla, N.Y., that was called back by officials.

“He just took off in the middle of (turns) three and four,” Sheppard said of Decker. “I thought I was leading, so I didn’t go.

“Then it was fine,” he continued. “The car was unbelievable, it really was. It’s been awesome since I got here. I haven’t touched a thing on it and I probably won’t.

“I really was just cruising. The car was unbelievable. The thing pretty much drives itself around here.”

Sheppard ran alone out front in a race that was slowed only by a lap-six caution flag for a flat right-front tire on the car driven by Tim Fuller of Watertown, N.Y., a former Syracuse 200 winner who was relegated to a last-chance race on Saturday. The 2009 Syracuse 200 champion beat Rick Laubach of Hellertown, Pa., who overtook Decker for second at the start, to the finish line by roughly a half-straightaway margin.

“I’m confident,” said Sheppard, who will make his 13th career Syracuse 200 start. “We have a really fast race car. We just need a good pit strategy and a little bit of luck.”

Decker, who locked into the fourth starting spot for the Syracuse 200 in Thursday’s time trials, settled for a third-place finish. Tim McCreadie of Watertown, N.Y., finished a steady fourth and J.R. Heffner of Valatie, N.Y., was fifth.

Bob McGannon of Garnerville, N.Y., finished 12th to earn the final transfer spot to the Syracuse 200.

“That’s crazy,” Hearn said when asked about his heat prowess. “That’s just because we’ve been able to time-trial good here. That’s the whole key to winning these heat races.”

A strong-running car is also necessary, of course, and Hearn’s Madsen Motorsports Teo-Pro machine was impeccable.

“The car is really good, especially in clean air,” said Hearn, who owns a record six Syracuse 200 victories, the most recent coming in 2012. “That’s all I ran in the whole race. I think when I was coming up on the lapped cars the first time the yellow (flag) came out (on lap nine, and then I was just catching the tail end of the field again at the finish.”

Dave Allen of Palmyra, N.Y., who finished 12th, was the final transfer to the feature.

Three cautions slowed the second heat. Al Blanchard of Fenwick, Ont., and Brian Murphy of Cicero, N.Y., were left sitting on the track after an opening-lap tangle; John McClelland of Martinsville, N.J., stopped on lap nine; and two-time Syracuse champion Jimmy Horton of Neshanic Station, N.J., slowed with a flat tire on the lap-nine restart (he would fall one spot short of transferring to the 200).

Phelps, 39, gave HBR a two-for-two night with his second career heat win the nightcap. He was victorious by about 10 car lengths over Duane Howard of Oley, Pa., who looked strong in his Mike Petruska-owned machine.

Howard was able close up to Phelps’s rear bumper on the fifth lap, but Phelps turned back the threat by pulling off a daring move around the outside of three lapped cars entering turn one after lap six was scored.

“We had to go by a pack of them there, but luckily we caught ’em just right to where I could clear ’em into one,” Phelps said of his surge past the lapped machines. “They left me enough room or it could have gotten real interesting. I had clear sailing after that.”

Phelps raced unchallenged after a caution flag flew on lap nine for Aaron Jacobs, who stopped in turn four.

“It’s been a good week so far,” said Phelps, whose best finish in 11 previous Syracuse starts is second, in 2010. “We had a good qualifying day and both of us won a heat. It’s really a testament to all the hard work by the HBR team up there at Weedsport.

“We got two brand-new race cars (both Sheppard and Phelps), and honestly, this is probably the most comfortable I’ve ever been up here.

“I think we got a lot of good things going right now in regards to attacking some of our past weaknesses,” he added. “We’ve had cars that are really fast up here. We’ve led races. We’ve put ourselves in position to win. But the one thing that we’ve really struggled with over the last couple years is fuel mileage, and we got a little bit different engine combination this year that I think is gonna let us do some things differently with the fuel game. I’ve also got a real comfortable car that I haven’t had to make one adjustment to all week, so I’m really optimistic.”

Donnie Corellis of Averill Park, N.Y., finished third, putting him in the Syracuse 200 for the 17th time in his career. Erick Rudolph, 22, of Ransomville, N.Y., was fourth to crack the 200’s starting lineup in his first attempt and Larry Wight of Phoenix, N.Y. — last year’s 200 runner-up — placed fifth.

Two-time Syracuse 200 winner Stewart Friesen of Sprakers, N.Y., finished seventh after his involvement in an opening-lap tangle forced him to restart at the rear of the field.

The Syracuse 200 starting field will be filled out by two last-chance races scheduled to begin at 12:45 p.m. on Saturday.