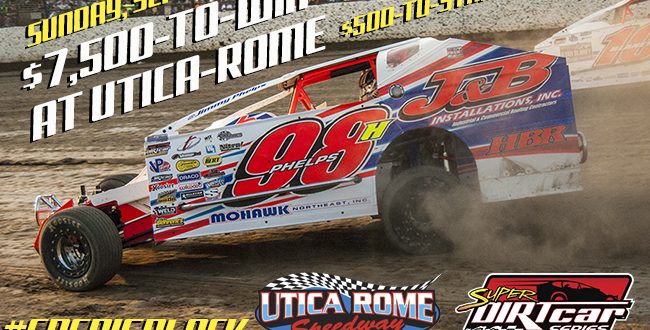 VERNON, NY – Utica-Rome Speedway has developed a reputation for being one of the fastest and most exciting race tracks on the Super DIRTcar Series tour. On Sunday, Sept. 1, the biggest stars in Big Block Modified racing will compete over 100 laps for $7,500-to-win and $500-to-start on the Vernon, NY dirt oval in an event presented by Broedel Fuel Group and Clinton Tractor.

So far in 2019, the Baldwinsville Bandit Jimmy Phelps and his HBR No. 98H have been locked out of Victory Lane despite their strong efforts. Last year Phelps found the winning formula and took the checkered flag at Utica-Rome in July. HBR will be checking their notebook from last year’s race to duplicate the success.

In that race, Phelps held off Danny Johnson and Erick Rudolph for 100 laps. This year Danny Johnson has lacked stability, racing for three different race teams. Incredibly he’s maintained a top-10 seed in points. Now it seems the operation has settled down and Johnson, a 2019 Hall of Fame inductee, is starting to find his groove. Can The Doctor get the familiar orange No. 27J to the front once again?

Erick Rudolph is this year’s DIRTcar 358 Modified Track Champion at Utica-Rome. Don’t expect the No. 25R to be far from the front in any of the race sessions on Sunday, Sept. 1. Rudolph took the win in a 358 Modified Series race earlier this year after outdueling rival Mat Williamson.

Billy Dunn and Pat Ward sit second and third in Utica-Rome’s weekly points. They are both good bets to take the fight to Series regulars for the $7,500 payday.

Peter Britten and Mike Mahaney are two drivers who have been performing well in their Hoosier Racing Tire Weekly Championship programs but have fallen short of their expectations in Series racing. Both are also with new teams in 2019. Britten is back to his family-owned program while Mahaney has moved to the No. 35 Huttig-owned Big Block Modified.

With a heavy schedule up until November’s Can-Am World Finals at The Dirt Track at Charlotte, Mahaney and Britten need to capture some momentum for the final leg of the season to make a push for the top five. Can Utica-Rome produce a new 2019 winner?

If you can’t make it to the track, be sure to tune in with our partners at FloRacing for the live HD stream. Also follow along with social media on Twitter, Facebook, and Instagram.