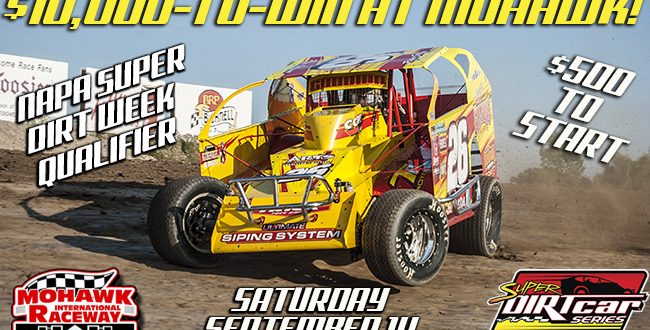 The Jimmy Phelps and Matt Sheppard are tied for the most Series wins at Mohawk with three each. This year Sheppard has a healthy lead over his rivals on his way to a possible ninth Series Championship. Phelps is currently sitting in sixth place in points and has been held winless in Series action so far in 2019. Can Phelps break the drought at one of his strongest tracks?

Mat Williamson is second in Series points and is still looking for his first career Series win. Williamson will have his Buzz Chew No. 88 piece at Mohawk rather than the family-owned No. 6. The St. Catherines, Ontario driver is due for a trip to Victory Lane with the Series.

Earlier this year, Erick Rudolph won the DIRTcar 358 Modified Series race at Mohawk. Rudolph’s team will be checking its setup notebook from that race to get dialed in for a run at the $10,000 payday.

Local ringer and part-time Series star Tim Fuller has won the last two Series events at Mohawk. He’ll be the only driver to win three in a row if he were to park in Victory Lane there in 2019, plus the automatic spot in the Billy Whittaker Cars 200 at NAPA Super DIRT Week would icing on the cake.

Back in June rookie driver Demetrios Drellos took a Hoosier Racing Tire Weekly Championship DIRTcar 358 Modified win at Mohawk. The No. 111 has been improving all year long and is looking forward to the Series going to a track where has a win.

The Gypsum Racing team will also be in town. Billy Decker and Larry Wight have been attached at the hip in the points standings running fifth and sixth. Wight has picked up two points-paying wins so far in 2019 while Decker has just one win back in February at the DIRTcar Nationals in Florida.

Peter Britten has not found the success he was hoping for on the tour this year so far. The No. 21A was on a tear through the field at Autodrome Granby when a mechanical failure stopped the car and ended his night.

Local teammates Carey Terrance and Louie Jackson Jr. are hoping to put up a home track defense. Both are always strong competitors when they join the Series on the road.