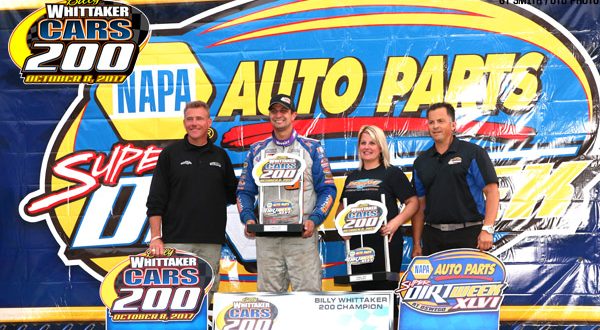 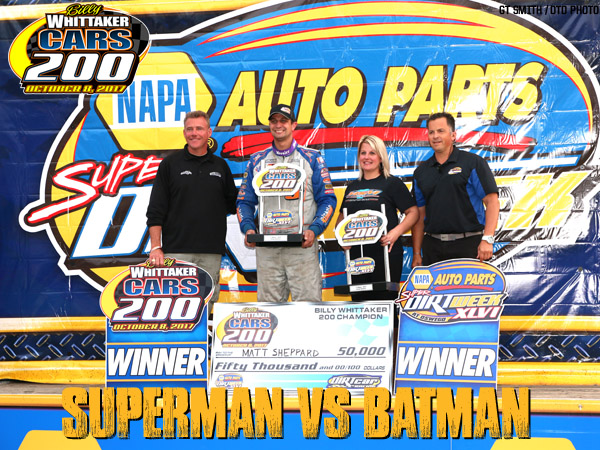 OSWEGO, NY — Oct. 8, 2017 — The Billy Whittaker Cars 200 certainly lived up to the hype. In just over two hours’ time and 200 laps, everyone in attendance at Oswego Speedway for NAPA Auto Parts Super DIRT Week was treated to everything they could have wanted with drama, frustration, heartbreak and celebration. A classic superhero battle between Super Matt Sheppard and Batman Peter Britten brought the crowd to their feet as Sheppard made a bold move on Britten in the last lap to pick up his second NAPA Super DIRT Week victory.

Sheppard started his quest for the NAPA Super DIRT Week sweep after securing the pole on Thursday. Sheppard then visited Victory Lane in one of the Big-Block Modified Triple 30s during Camping World Friday Night Lights. On Saturday, Sheppard added one more piece to the puzzle with a 358 Modified victory in the Great Outdoors RV 150.

Finally, under a warm, sunny day, the 41-car field of Big-Block Modifieds took the Green at Oswego Speedway. The Waterloo, NY driver jumped out to an early lead and showed the way. As the race hit the quarter mark, the 5/8th-mile started to take rubber and teams began adjusting their strategies to adapt to the track conditions.

As the afternoon started to tick away, however, the weather changed, effectively changing the conditions of the racetrack and the dynamic of the Billy Whittaker Cars 200.

“The track did a 180 — all of a sudden a fresh-tire race instead of a track-position race,” said Sheppard.

Shortly after the halfway mark of the 200-lapper, the drama started to kick up a notch in the Billy Whittaker Cars 200. The harder tire compounds started to peel away the rubber embedded into the clay racing surface, and drivers were able to maneuver around Oswego Speedway.

“Around the lap 100 mark, many guys came in and put on 400 compound tires,” said Larry Wight. “You used to see it at Rolling Wheels Speedway where the hard tires peels the rubber off the track. Then you have to come back in and put the soft tire back on, and then you can run around again.”

The Bat signal went out and Peter Britten, who was the first to venture to the outside groove, made his way to the lead from the 25th starting spot on lap 105.

As Britten was making his way to the front, Sheppard slipped as far back as tenth.

“At that point we were kind of fading back through the field and decided our only option to try to win this thing was to wait until lap 150 to 160 to try and put fresh rubber and try to charge to the front,” said Sheppard.

And that’s just what he did. Sheppard returned to the track with fresh rubber on lap 161 in the 20th position. From there, the charge was on. Ten laps later, Sheppard was up to ninth. A lap 171 Red Flag for Carey Terrance bunched the field together, a blessing for Sheppard.

As the race for the lead between Wight and Britten heated up, Sheppard worked his way into the top five.

A turning point in the entire Super DIRT Car Series Point Standings occurred when Billy Decker brought out the caution flag with 20 to go. Decker’s dreadful afternoon continued while simultaneously allowing Sheppard to be on the back bumper of the leaders.

Sheppard took over third and closed in on Wight and Britten as lapped traffic became hectic. Britten was held up significantly by the lapped car of Adam Roberts allowing Wight and Sheppard to close in.

The capacity crowd at Oswego Speedway came to their feet as Wight took the lead momentarily before Britten muscled back ahead. Britten tried to maneuver around the lapped car of Kenny Tremont, and Sheppard went where Sheppard wasn’t, the outside.

“I could get around the bottom and Peter’s spotter must have been telling [Britten] and [Britten] decided he was going to protect the bottom,” added Sheppard. “I knew I probably couldn’t drive around him in Turns 3 and 4 and my only shot would be in Turns 1 and 2 and I got a pretty clean run in there and the car stuck. I got enough momentum to drive around the outside of him and cleared him on the backstretch.”

Exiting Turn 2 with the lead, Sheppard needed to hit his marks for the final two corners.

“What an unbelievable feeling getting into Turn 3. I kept telling myself, ‘don’t mess this up. Let’s get this back to the checkered flag,’” said Matt Sheppard.

With nothing but daylight in front of him, Sheppard soared across the finish line getting the best of Batman, capturing his second NAPA Super DIRT Week title.

“There’s really no way to describe it but heartbreaking,” said Britten. “Congrats to Matt Sheppard. He’s an amazing driver and an amazing talent. Their whole team is fantastic obviously a deserving effort but I feel our team really would have been deserving efforts too. Ray Graham gave us everything that we needed to win. Troyer Racecars and Enders Motors; hell of a combination.”

With his 11th victory on the Super DIRTcar Series, Matt Sheppard recaptured the points lead over Billy Decker and is knocking on the door of setting a new record for most wins in a season that he previously set during the 2016 season.

The Super DIRTcar Series is back in action at Brockville Ontario Speedway on Friday, Oct. 15 before closing out the season as all dirt roads lead to Charlotte and the World of Outlaws World Finals at Charlotte Motor Speedway on Thursday, Nov. 2-4, 2017.