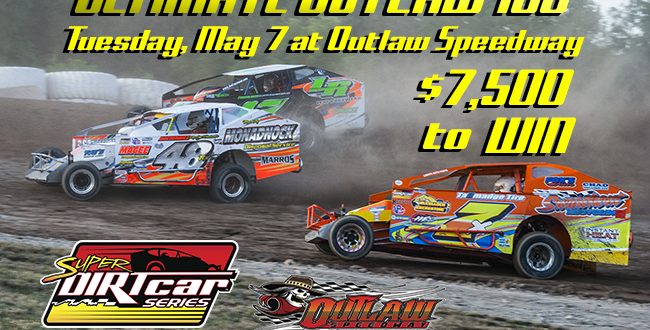 DUNDEE, NY – April 28, 2019 – On Tuesday, May 7 the Super DIRTcar Series takes on the 4/10-mile Dundee, NY clay oval for just the fourth time in Series History. Last year, legendary driver Brett Hearn came away with an exciting victory, adding to his total of 900 plus feature wins. The 2019 crop of Super DIRTcar Series drivers are guaranteed to put on another 100-lap classic.

The early-season points battle is taking shape. The fast and dicey Can-Am Speedway set up what may be the story of the year. Matt Sheppard is looking for his eighth Series Championship, while the pairing of Mat Williamson with the Buzz Chew Racing team has many wondering if they’ve got what it takes to topple Sheppard’s reign. At Can-Am, Sheppard and Williamson finished one-two. Will the Ultimate Outlaw 100 create separation or a lead change?

Gypsum Racing’s Billy Decker and Larry Wight have been fast out the gates, both recording victories at the DIRTcar Nationals in February. Decker ran as high as second and challenged Sheppard for the lead at Can-Am until a broken front end killed his chances of a win. Decker has a big part in the short history of the Super DIRTcar Series at Outlaw Speedway. The Franklin Flyer was the Ultimate Outlaw in 2017.

Defending the home turf will be DIRT Motorsports Hall of Famers Alan Johnson and Steve Paine along with Outlaw promoter Tyler Siri himself, who already has Super DIRTcar Series laps under his belt at the DIRTcar Nationals.
With this event being the first-midweek event on the lucrative SDS trail, a very diverse field is expected to fill the Yates County oval’s pits.

A strong field of Big Block Modifieds are expected to visit the high banks of Dundee, NY to race for $7,500 and vital Championship points. Drivers agree you need to go into July and August with momentum to have a strong season, so picking up points in these early races are is a must, especially with the High Bank Holdup 100 being rained out.

Visit www.outlawspeedwayllc.com for more information about the event.

If you can’t make it to the race track, the Ultimate Outlaw 100 will be broadcast live and in HD on FloRacing.com.