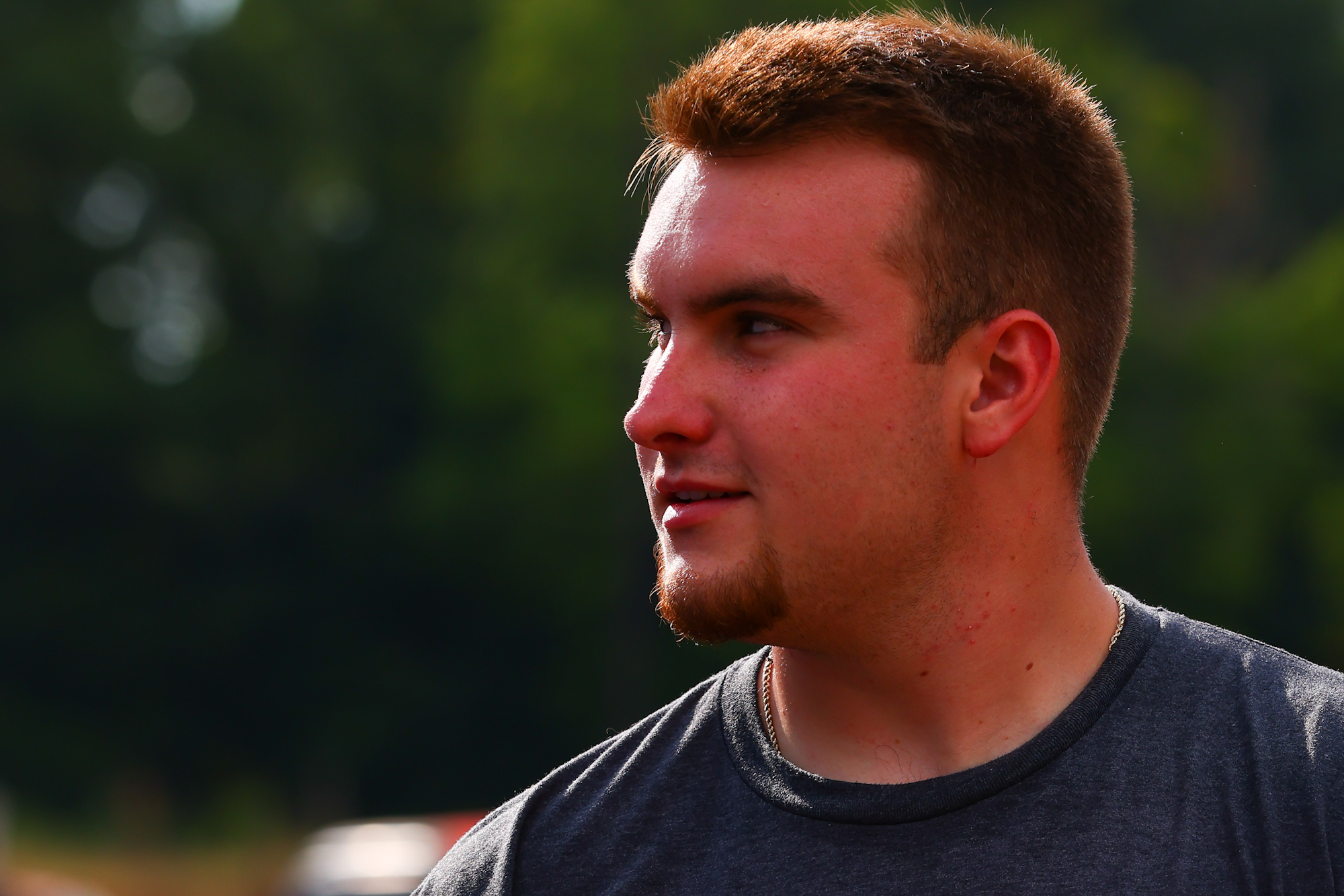 At 20 years old, Payton Freeman has only scraped the surface of his bright future in Dirt Late Model racing. This summer, he’s taken on the biggest challenge of his career to date as a rookie on the DIRTcar Summer Nationals, and already had success in only his second full-time season driving a Super Late Model.

It’s all been part of a learning experience for the team from Commerce, GA. That’s why they’ve traveled over 650 miles away from home to take on the world’s most grueling dirt track racing circuit.

“I think [the Summer Nationals] is the best way to get the most experience in the shortest amount of time,” Freeman said in an interview after leading 17 laps of the Feature at Springfield Raceway. “Even with it being the second week here I can already see things I’ve picked up on and everything like that.”

Freeman and the team won their first regional Late Model championship last year, capturing the Southern All Stars Racing Series points title and Rookie of the Year honors in their first full season at the Super Late Model level. That’s when they knew it was time to move up and give the DIRTcar Summer Nationals a try.

They spent several weeks in the spring getting things ready for the six-week venture, readying their two cars and spare parts for the operation. With only one DNF through the first 18 races, the team has done well in conserving equipment while racing hard, but it’s come with a major eye-opener to both the driver and crew with the long hours they’ve put in to maintain their performance level.

“You look at it and think, well four hours don’t seem that bad, but after two or three four-hour trips in-a-row it kind of gets tough,” Freeman said. “I think that’s been the biggest thing, just making sure you can get from racetrack to racetrack each night in the amount of time you need to so you can work on your stuff.”

Like several multi-time Summer Nationals champions to later make the jump to the national racing scene, Freeman has similar plans in his future. Racing well in several areas of the country on different track sizes and surfaces is a key to success at that level, but it hasn’t been an opportunity he’s had often until now.

“On the national side of things, a lot of those racetracks are up in this area, and I think it’ll better prepare me for what I want to do in the future going forward,” Freeman said. “Racing at home, we kind of know the racetracks and things like that and know what our race car likes. Coming up here to these new places and learning the racetracks is probably the biggest thing.”

Seventy-one laps led, five Fast Qualifier honors, four Heat Race wins, two runner-up Feature finishes so far, and the season’s only half over. Most notably, he’s been able to do all of this with next to zero experience racing any of the tracks on the schedule. But with a little help from his friends, Freeman has gotten by well through the first four weeks.

“I think one of the biggest parts is leaning on my car builder [Marshall Green of Capital Race Cars] and Shane Clanton, as well, for information,” Freeman said. “Between them things and on-and-off the phone with my dad, he’s helped me a ton with adjustments.

“I watched a bunch of videos before we come up here. Did a little homework on the racetracks, especially early in the night like if you position yourself early it makes it a little easier later.”

Though racing in the Land of Lincoln has been almost completely unfamiliar to him, Freeman has put one of his best skills learned racing around the red dirt ovals of the Southeast to good use. Passing in the Feature can come at a premium where he’s from, which puts a great deal of emphasis on Qualifying well for a chance to start at the head of the field.

“I think probably the biggest thing is where I’m from, you always have to drive hard when it’s time to qualify and start up front,” Freeman said. “That’s no different up here. I’ve tried to carry that with me up here. Just need to figure out what we need to do for the race.”

With two runners-up thus far, it looks like he and the crew have figured out racing on the quarter-mile ovals. He turned a lot of heads in the Feature at Clarksville Speedway on June 2, leading the first 33 of 40 laps before getting passed in lapped traffic. On Sunday at Tri-State, he went toe-to-toe with Bobby Pierce, leading the first 13 laps in traffic and trading slide jobs with the four-time champion before ultimately coming home second again.

Armed with a great crew, some great resources and an army of fans watching back home on DIRTVision, Freeman is confident he can make it to Victory Lane before the tour comes to a close in two weeks. It’s a goal he set for himself when the tour began, and he’s sticking to it.

“If we can come up here and win a race or two, I feel like we’ve had success,” Freeman said. “I really feel like if we can just figure out the little bit we’re missing in the race, I feel like we can top that. Just winning some races and making sure we have something left when we head back home, they’ll be the biggest two things.”

Freeman and the rest of the DIRTcar Summer Nationals field returns to action Wednesday, July 13, in the tour debut at Montpelier Motor Speedway in Montpelier, IN. If you can’t be at the track, watch every lap live on DIRTVision.