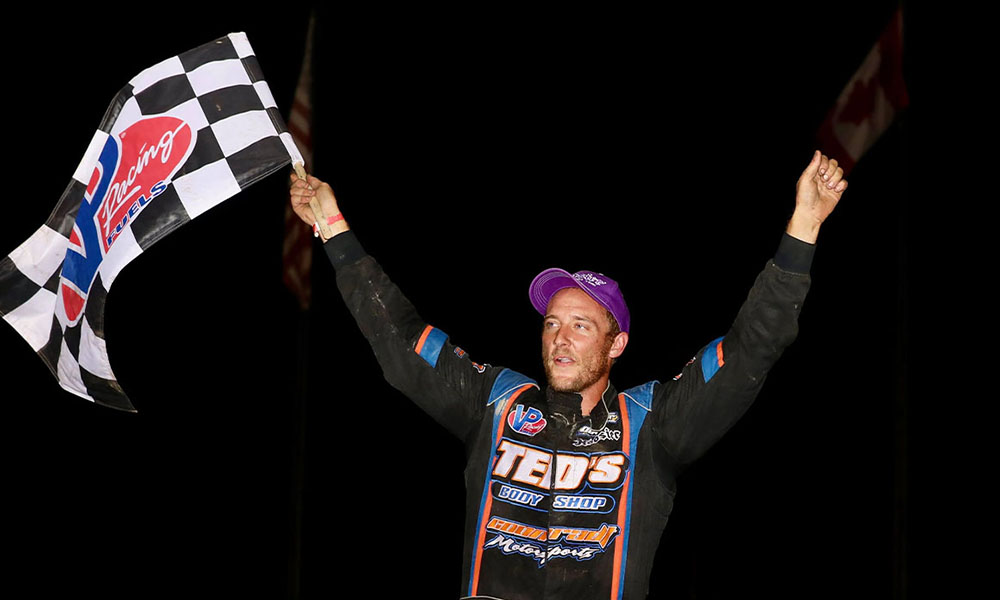 All Josh Coonradt needed was a chance. A moment. A quarter panel. And he got it Tuesday night at Brewerton Speedway.

The West Milton, NY driver, raced into third, getting a front-row seat to Jim Normoyle and Luke Horning’s epic battle for the lead in the final 10 laps. As Coonradt lurked behind the lead duo, he was waiting, hoping for an opportunity.

That’s when Horning’s right-rear quarter panel came off, forcing officials to throw the yellow. The last-lap caution was the break Coonradt needed, as “Cousin Luke” was also sent to the pits with more tin hanging off his car.

Horning’s loss turned into Coonradt’s gain, setting him up for a two-lap shootout with Normoyle.

As the green flag flew, Coonradt and Normoyle raced wheel-to-wheel around the track, neither willing to give an inch as they took the white flag. Both drivers stayed together through Brewerton’s tight Turns 1 and 2, and neither could pull ahead down the backstretch.

But when the two drivers hit Turns 3 and 4, Coonradt went into another gear. The defending NAPA Super DIRT Week Pro Stock champion turned on the jets through the final corner, gaining enough momentum to beat Normoyle to the finish line by .094 seconds.

A victory at the D-Shaped Dirt Demon was something Coonradt never expected to happen as the laps wound down.

“I didn’t think we had the car to win tonight,” Coonradt said. “I think we were off a little bit on the setup, but I kind of could counter what I think we were missing. It just took Jim [Normoyle] to slip up on that little bit of moisture down in the track, and it was just enough to give me the run that I needed.

“Without the restart or the yellow, I don’t think I had a chance against him.”

The win is Coonradt’s seventh of 2021 and first at The D-Shaped Dirt Demon.

Even though he stated he didn’t feel he had the car to win, Coonradt knew the high line was what suited him best in the last 10 laps.

“I’m not really a bottom feeder; I prefer the top,” Coonradt said. “I feel like if you can keep the momentum, you can gain speed little by little by little under green flag laps. That was just a hell of a race, and I can’t thank Jim Normoyle enough for racing me as clean as he did.”

Normoyle settled for second as the taste of victory was ripped from his clutches in the final corner. The Little Falls, NY driver was happy with his performance despite coming up short.

“I’ll take it, we’re all around the clock, good guys, and we had a lot of fun out there,” Normoyle said. “To say the least, I’m very happy.”

Chuck Dumblewski crossed the line third after starting 10th. The Amsterdam, NY driver still worked his way to a podium despite being plagued by overheating issues.

“We definitely had a good car; we started 10th, so you know I passed quite a few cars,” Dumblewski said. “We were easily a top-five car, and without overheating issues, I think I could’ve been right there in the mix with Coonradt and the [Normoyle].”

A timely opportunity allowed Josh Coonradt to prevail, kicking off NAPA Super DIRT Week 49 with a victory at Brewerton. It also earned him a guaranteed starting spot in Sunday’s Pro Stock 50 Feature. It’s momentum he’ll use toward trying to climb the mountain at Oswego for a second time.

UP NEXT: The DIRTcar Pro Stocks begin their quest toward NAPA Super DIRT Week glory at Oswego Speedway starting with Qualifying on Friday.